The Pinnacle of Broadway Roles 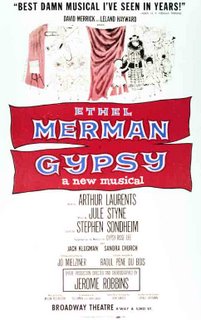 On May 21, 1959, the opening of Gypsy made Broadway history. Many consider this to be the quintessential musical theatre work of the twentieth century. With music by Jule Styne, lyrics by Stephen Sondheim, and a book by Arthur Laurents, it is a masterpiece of the book musical. Gypsy is loosely based on the memoirs of the infamous burlesque star Gypsy Rose Lee, and focuses on her relationship, or rather lack of a relationship, with her mother, "Mama Rose", whose name has become synonymous with the ultimate stage mother. It starred Ethel Merman, arguably the biggest Broadway broad of them all. The incredible lyrics and music of "Some People", "Everything's Coming Up Roses" and "Rose's Turn" are haunting. "Everything's Coming Up Roses" conveys hope and belief in what can be or more likely, denial of the truth. While "Rose's Turn" conveys selfishness, disappointment and finally acceptance. I believe it is the greatest piece of music ever written for the stage. It's not just a song – it is a play in itself. It sums up Rose's life – what could have been and what there is to accept. The role of "Mama Rose" is the Mount Everest of musical theatre roles for actresses. It won't go to just any diva. The divas playing this have been bigger than life – the brassy and domineering Ethel Merman and Tyne Daly to the sexy and beloved Angela Lansbury and Bernadette Peters.

The creation of Gypsy is an interesting story. Producer David Merrick wanted to make Gypsy Rose Lee’s memoirs into a musical and contacted book writer Arthur Laurents. Laurents wanted Stephen Sondheim to write the music and lyrics. Apparently, Ethel Merman had just finished a run in a flop called Happy Hunting by an unknown composer. She wanted nothing to do with another unknown composer so she insisted that Jule Styne get the job. About Sondheim, she said, "I don't want that kid writing any music for me." But fortunately, she didn’t care if he wrote lyrics. So, as the story goes, the "for me's" in "Rose's Turn" are to be bitchy on Sondheim's part, to get back at Merman because she said "that kid can't write music FOR ME". Laurents confirmed that it is in fact true when asked a few years ago. So Sondheim stayed on to write lyrics, which he was most unhappy about. Most interesting is that there I have heard that is proof that Sondheim wrote both music and lyrics for "Rose's Turn". Styne wanted to make it a ballet but Sondheim brought his composition and the rest is history. It was a busy season for musicals in 1959 and 1960. The Sound of Music opened a few months later on November 16, 1959 and Fiorello! opened on November 23, 1959. Fiorello! took the Tony for the Best Musical as well as a Pulitzer, while Mary Martin took the Tony for Best Actress in a Musical. Still, Gypsy ran for 702 performances and Merman became known for this pinnacle role. Merman loudly played "Mama Rose" with ruthless vulgarity and stupidity. Nothing would or could stand in the way of this Rose in getting her own way. It was said that she didn’t have the acting ability to handle the script so she simply played herself. However, Sondheim called her a "a comic with a big, brassy voice."

In 1972, when Angela Lansbury was approached to do Gypsy in a London production. Merman had been asked to do it in London in 1961 but she didn’t want to leave the US. Angela didn’t want to do it, arguing that "I can’t sing like Ethel Merman." She already had two Tonys under her belt for Mame and D 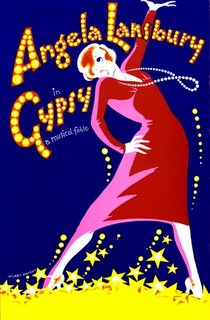 ear World. Laurents and Sondheim, the two who had given her her entrance to the musical theatre world she wanted so badly by casting her in Anyone Can Whistle in 1963, convinced Angela to look at the script and lyrics as an actress. It was enough to convince her - she also brought her brother Edgar Lansbury aboard as a producer. Gypsy premiered in London on May 29, 1973, just over 14 years after its Broadway opening. Angela said, "That first night was an excruciating nervous event for me. Here I was, coming into London playing the great Merman role in a Gypsy they had never seen. It was a dynamite situation in every respect, because I had to sell myself to those critics." Of course, Angela won the Best Actress award in London that year. Gypsy played for seven months in London and then they took it on tour from Toronto to California and ultimately into New York. It opened on Broadway on September 23, 1974. Perhaps because New York audiences were unwilling to see another actress in the role, even after 14 years, it only ran for 120 performances on Broadway. She said, "I knew I couldn’t sing like Merman", but that didn’t stop Angela from taking her third Tony for the role while introducing us to a new kind of Mama Rose. 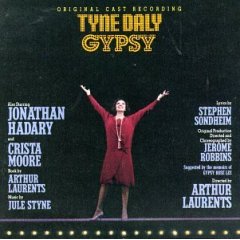 A second revival of Gypsy opened on Broadway on November 16, 1989 starring Tyne Daly. This production celebrated the thirtieth anniversary of the original opening of Gypsy. Daly was well known for her television series "Cagney and Lacey" but had only been on Broadway once before. She was closer to the original Merman than Lansbury - a big rough and tough broad. She brought more anger to the role. During "Rose’s Turn," she bent down and hit the stage, symbolically blaming the stage for being denied a career of her own. It ran for 476 performances, but yet again this Mama Rose won a Tony for her performance. 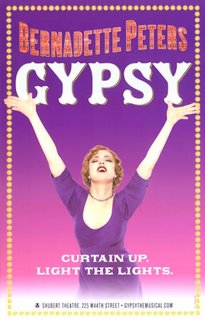 In 1961, 13 year old Bernadette Peters played the roles of Thelma and Hawaiian Girl in a summer Las Vegas production of Gypsy which starred Mitzi Green as "Mama Rose". In September of that same year, she joined the second national tour of Gyspy where she played one of the Hollywood Blondes while understudying the role of Dainty June. She famously met her current and long time music director and friend, Marvin Laird, on this tour. The tour starred Mary McCarty as "Mama Rose", and opened September 14, 1961 at the Shubert Theatre in Detroit before moving on to the Forrest Theatre in Philadelphia on November 13th. It also played in Chicago, before closing at the Hanna Theatre in Cleveland on January 20, 1962. Bernadette then spent the summer of 1962 playing the role of Dainty June, with Betty Hutton as "Mama Rose", in a production that was staged in Pennsylvania at the Pittsburgh Civic Light Opera and in Ohio on the Kenley circuit in Warren and Columbus. Over forty years later, Bernadette finally had the chance to fulfill her destiny to play "Mama Rose" on Broadway. Bernadette was a completely new kind of "Mama Rose". She played her sexier and with more vulnerability than the previous Roses. In comparing recordings, I hear the anger and defeat, but more tenderness and shame as well. This production opened on Broadway on May 1, 2003 and closed May 30, 2004, after 451 performances. It earned Bernadette a Tony nomination and although she did not win, she gave the performance of a lifetime and perhaps the greatest live performance ever recorded at the Tony Awards when she performed "Rose's Turn."

In January 2003, I finally had the opportunity to see a live production of Gypsy on Broadway starring Bernadette Peters. This production holds a special place in my heart. When Bernadette belted out "Some People," Rose's initial stand to get out and make something for her daughters, I became a die-hard fan of Bernadette which lead to my friendship with Noah and Vicki, whom I met at the final performance. This was also the first Broadway show that I saw more than once, as I went back for a second dose in March and to the final performance in May.

A constant game I play with my theatre friends is who may become the next generation's Mama Rose. It could be ten or twenty years from now. Maybe it will be Mary Testa, Donna Murphy, Victoria Clark or even Shoshana Bean way down the road. Most likely she will be somebody we haven't even heard of yet. She will be an actress in her 50s, one who has guts to spare and one who certainly has a big voice and a commanding presence. Until then I will have to travel for my Gypsy fix.

In August, I will go to the Ravinia Festival in Chicago to see Patti LuPone conquer the role of "Mama Rose." Fortunately, Patti is at the right age and of the right stuff to take on this role, but unfortunately she will be too old the next time it is revived on Broadway. Patti is mixture of all those who went before her and I have no doubt that she will fulfill, and most likely exceed, all expectations.

*sigh*
Oh Angela Lansbury and Tyne Daly.
How I love them.