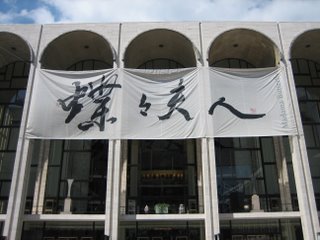 It was the first ever open house at the Met Opera and boy, did they open - and bring down - that house. 3000 tickets were given away on Wednesday morning for today's free event. Sally and arrived shortly after 9:00 a.m. this morning. The technical director talked first about the stage floor, the lighting, procedures, etc. - it was fascinating to see all of the work going on - testing lights against scenery. At about 11:00 a.m., new Metropolitan Opera General Manager Peter Gelb welcomed the full house to cheers. We were warned that, since this was a dress rehearsal, there was a possibility they would stop the performance to fix problems. It appeared to be flawless. The lighting and the costumes were simply stunning. Never have I felt such chills and thrills. Madama Butterfly was the 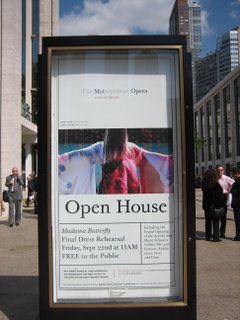 second opera I ever saw and it was a traditional production and I was so mesmerised by it that I actually forgot to read the Met titles; conversely, this production is a modern, updated production. The set was very sparse and simple but oh so abundant in richness and beauty. Puccini's music is still Puccini after all and that cannot disappoint, but oh that set! Oh, those costumes! My pictures are blurry, but they capture at least a tenth of the rainbow of colors that we saw today - I just cannot put it all into words (click on the pictures and you'll get a larger picture on your screen). You could hear the gasps throughout the audience at the first appearance of the geishas. It was just completely stunning. After the curtain fell at the end of the first act, the audience was wild with applause. Mr. Gelb reappeared and introduced Mayor Bloomberg who basically put the city's stamp of approval on the "new" Met. We were then treated to finger sandwiches and cookies by a couple of patrons. The second and third acts were just as intense as the first. The company received a rousing standing ovation and then the creative and artistic team was joined by Margaret Jungwait for a question/answer period....then we lined up to walk across the stage! It was a marvelous experience. 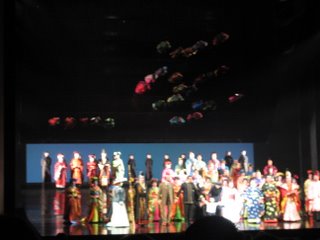 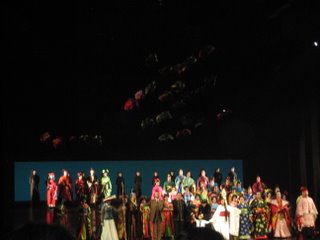 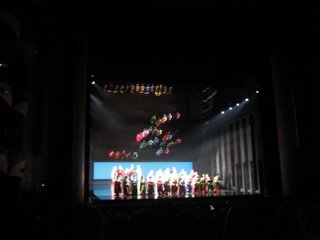 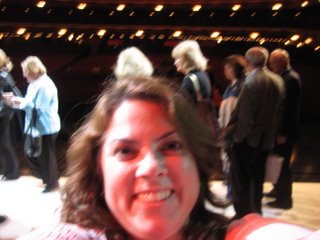 By the way, my beloved Barbara Cook, fellow opera buff, was there with Harvey Evans. Sally and I were standing at the back of the orchestra watching people file out before we headed to the stage walk line. Barbara and Harvey were walking up the aisle and when got closer to me I made eye contact with her and she smiled at me. I took the opportunity to tell her how much I enjoyed her Met concert and told Harvey and Barbara, too, that I saw them perform at Wall to Wall Sondheim. Barbara was lovely and was just as excited about being there today as any of us. They were both just gushing about Madama Butterfly and Barbara asked me if I liked it. She thanked me for talking to her. I think I jumped up and down at one point.
at 7:19 PM