The revival of Company begins previews on October 30th at the Ethel Barrymore Theatre. It's another Sondheim musical for me to become devoted to. My friend Litwit extoled this production when she drove a million billion miles to Cincinatti to see it when the thought of a Broadway revival was a mere glint in our eyes. The best thing about Litwit is that she understands what one must do for Sondheim. I can't remember why I didn't make the pilgrimage to Cincinatti myself, but I'm sure I was being entertained somewhere or another.

Company first opened on Broadway in April, 1970. It had a successful revival in 1995. Why revive it again? Perhaps this is why:

"Company remains a landmark musical. The libretto strides toward a formulation, at last, for a musical's book as a play of its own kind. Sondheim's lyrics, by turns pyrotechnical and tender, set new standards for technique and dramatic aptness, but it was his music that made this day for him. Its
exraordinary diversity and depth, its melodic richness and its accessible sophistication, finally won him recognition as a composer.

In fact the score earned what he considered his "first set of good reviews." After opening at the Alvin Theatre on April 26, 1970 Company enjoyed a healthy run of 706 performances. It even won Tony Awards for the season's best music and lyrics, along with the prize for best musical."
-- From MartinGottfried's Sondheim

No doubt this Company will find greater depth than ever before as John Doyle puts his directorial style stamp on it. Once again as in Doyle's Sweeney Todd, the actors are the musicians.

Synopsis:In a series of vignettes, New York bachelor Bobby learns about the perils and pleasures of love, marriage, dating and divorce from his married friends. The Stephen Sondheim score includes "Being Alive," "You Could Drive a Person Crazy," "Another Hundred People" and "The Ladies Who Lunch. " 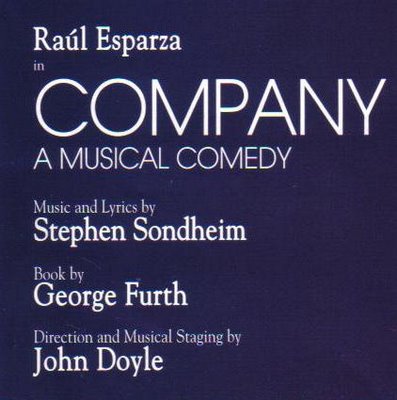