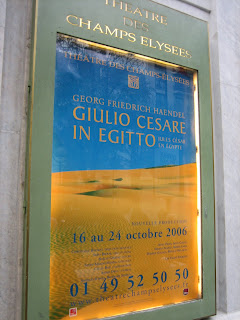 After reading about all the scandal coming out of La Scala this week as reported by my friend Opera Chic and hearing the news that even Placido Domingo was heckled for his conducting of La Boheme at the Met last week, I was reminded of my experience at Theatre du Champs-Elysees in Paris in October. I realized I never said anything about my first opera experience outside of the United States!

I decided to go to Cesare for two reasons really: Khaleem was going and it was a chance to see Andreas Scholl in action again.

I wasn't in the ideal condition to handle a Handel opera after walking around Paris for hours and hours, but I took a chance that my will power would overcome my tired mind and body. I was nervous, knowing that my ears would be shocked again when hearing the counter-tenors - and this opera has THREE counter-tenors - and that I would have to endure the droning of harpsichord. It wasn't a big house. There wasn't a big orchestra. There wasn't even a real curtain. When the "curtain" did open, I believe I gasped audibly at the starkness of the stage. There was nothing but sand. I'm used to grand opera at the Met and there was certainly nothing grand about this production. But I do love the theatre, so I waited. Fortunately, the theatricalness of it all didn't disappoint.

Last season, I was blown away by Scholl in Rodelinda at the Met. Not only is his presence physically commanding, but his voice is commanding - yes, even the shockingly high counter tenor. He just takes over and runs away with a show. Here, he was terrific. He didn't blow me away as he did as the returning king in Rodelinda, but he was Ceasar to me here - a leader of his men and irresitable to Cleopatra. The two singers who really caught my attention in this production were Alice Coote and Rosemary Joshua. Coote has a brilliant energy and her mezzo is rich and beautiful. Joshua is glamorous yet unassuming. Her voice is bright and clear without being tinny. She seems fearless on the stage.

The "set" or lack thereof, never inspired me but it served its purpose. It didn't distract from the singers. This was also my first modern dress opera. I was able to concentrate completely on the story - even though I did nod off in the first act (horrors!) - and even more surprisingly, there were no Met titles and the super titles were in French! But by the end, I was thrilled.

The thing that was most shocking and exciting all at once was the booing from the audience directed at the French horn player who threatened to ruin Scholl's beautiful aria "Va tacito e nascosto". This is basically a duet between the horn and the counter-tenor. The horn player warbled off-key through it and sounded in dire need of a trip to band camp.

It was my first time of experiencing boos in the theatre. I was excited that it happened! Yet, I was shocked too! I had heard stories of audiences being very demanding in Europe. In America, it rarely happens unless they are mad that somebody is a no-show. American theatre audiences wouldn't dare be so rude - unless of course, it's keeping their cell phones on, talking, eating, getting up and down numerous times... Well, booing and heckling happens at American sporting events all the time - sports fans are very demanding of their favorite players and when they are let down, they let the player know about it. I think this should be the case at the theatre too - whether its the Broadway, concert or opera stage. Why shouldn't we expect the very best and voice our opinion if it's not? We're certainly paying for the best. The Europeans have it right. This is the artist's job! Of course there's pressure...but they say if you can't stand the heat, get out of the kitchen. So, the next time I'm horrified at a performance, I'm prepared to let the artist know about it. At least, I think I am. 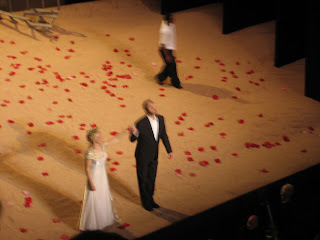 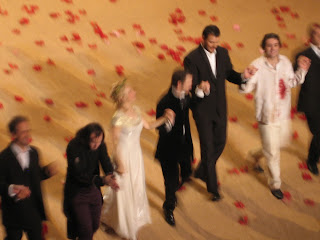 Girl, you just do not sit STILL, do you?! I promise to read about your latest awesome operatic adventures when I find a moment to breathe!

how come you're rolling these out like six or seven weeks after the fact? reminiscing?

or relevant. I can relate, when you have a busy schedule like you seem to have, sometimes you want to be current, but when things pile up you have to post past events when they become relevant. I loved your story, thanks for sharing it and not letting it slip by.

When you'd posted just the photos, I was a little puzzled, but now I get it! Nicely done.

hmm, i feel you...i can only handle handel when i'm in the mood. but the only opera i've ever seen of his was acis and galatea and i only like that opera b/c of the lines "Fly swift, thou massy ruin, fly!/Die, presumptuous Acis, die!" which i think is absolutely hilarious. hehe.

When that horn player started to go bad, you should have jumped up and said, "Put me in, coach, I can play it."