Tonight: A Gig by Lauren Molina

Lauren is wildly talented. Lauren plays the cello, guitar and even broke out the ukelele at this gig. I discovered Lauren in her Broadway debut as Johanna in Sweeney Todd. Johanna was never a character I identified with; I found previous shrill and flighty, but Lauren's Johanna brought me around. Lauren is gentle and wide-eyed, but has a sense of the ridiculous, both in Sweeney and as a performer. I saw her grow in her performance of Johanna from shy to confident. I have not forgotten seeing her fearless cabaret performance of A Call from the Vatican at The After Party this summer. She was absolutely fearless, after all A Call from the Vatican is not for the shy and retiring. Lauren's Pianos gig was filled with her own original songs and a cover or two. Her voice is pretty with just the right amount of emotion. She doesn't try to sound like a pop singer. She simply sings with honesty, peppered with a touch of humor. You can listen to a few of her songs at her Myspace. 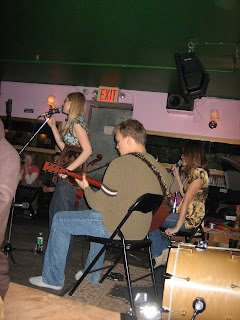