Verdi DON CARLO, Met 7.12.2006; Levine; Racette, Borodina, Botha, Hvorostovsky, Pape and Ramey. MY WORD. Triumphant! Bravissimo! It was a starry, starry night. I couldn't have asked for a more exciting cast. Every single aria was delivered with brilliance and beauty. I was most overwhelmed by Pape's aria at the top of Act IV. What he lacked in warmth in his acting, he made up with his tender voice in "Ella, giammai m'amo". He wasn't as commanding throughout the performance for the most part. I saw him two seasons ago in Faust and was blown away by him so I was expecting just a bit more. Borodina had a chance to show off her comic timing in Act II with "Nei giarden". I have been impressed with her since I saw her perform at the Volpe gala and then again this season in Gioconda. Her voice is deep and rich and she delivered throughout. I closed my eyes to Botha and just listened to him. He is one of the few tenors that I have actually enjoyed listening to - he has a rich emotional voice, not high and tinny, but lovely. Disappointingly, he has no stage presence - not a lick of charm and that mullet must go. I guess I can put up with his lack of acting skills as long as I can hear that voice. Ramey's voice is strong but at times I was reminded of the diesel trucks that tend to idle on my street. Is it age? Nevertheless, he was sufficient. Finally, I have seen Hvorostovsky in an opera. Oh my. How is it possible that he is even better looking in person? And that voice! I was a bit taken back by his stand and deliver approach at times, but oh, he did deliver. Naturally, it was Racette who left everybody else in the dust with her gentle acting. Her voice is absolutely lovely and her beautiful acting just makes her the whole package. I think of all of the singers I have seen at the Met, she is perhaps the most consistent in both performance of voice and acting skill. I enjoyed this opera very much, yet I was left a little dumbfounded at the ending. Did the librettists succumb to writer's block? Did Verdi get tired of composing? It is an odd ending to a perfectly lovely story - it didn't make sense or give us closure. But if there's one thing I've learned in opera, it's not to expect stories that really make sense.

Behold the autograph alley experience: Yes, I got Pape's autograph. I was told it couldn't be done. But I got it. And now somebody owes me a cookie. Note: Sally was supposed to photograph the autograph coup, but she was too distracted by Hvorostovsky's hunky presence, which was surprisingly surly and broody. 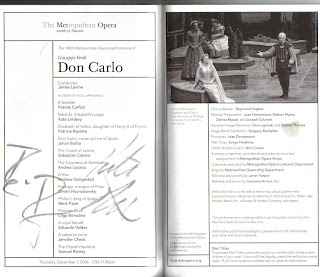