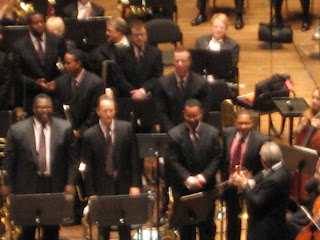 Program: AARON COPLAND (1900-1990) - El Salón México (1936) - well, I had to do something I rarely do: work late. I arrived at the third tier of Avery Fisher Hall just as the orchestra was beginning the Copland piece, much to my chagrin. I had to suffer with the other tardy souls in the lobby. The Phil had the forethought to place large flat screen televisions so we could watch the performance via short circuit, but it was rather hard to hear. Oh well. And I love Copland. Sigh.

CHRISTOPHER ROUSE, born in 1949 in Baltimore, Maryland - Symphony No. 2 (1994) - This was the debut of this piece and the composer was in the house. It was an angry, chaotic, messy trainwreck of a piece, yet I didn't hate it. I certainly didn't love it though. It was startling at moments. It kept the horns and the percussion quite busy. I was glad when it was over.

Click here to catch some of the action!
at 9:28 AM

Oh, you're going to this!? Ah! I love the Tchaikovsky and Marsalis is rarely a disappointment, so this is sure to be awesome!

Wow! Thanks for this. I couldn't keep my feet still!

ooh! i went to see wynton marsalis once a few years back when i lived in new york. awesomeness.