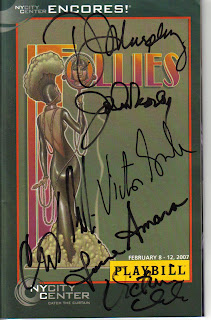 The first words spoken in Follies: "So many of you came! I am astounded." Really, there's no reason to be astounded. City Center was packed for the six performances of Stephen Sondheim's Follies with good reason, and I was fortunate enough to be at two of those performances. It was impossible to resist a cast that includes the likes of Donna Murphy and Victoria Clark. And of course, it is always impossible to resist Sondheim.

My first connection to Follies was with the 1986 DVD of Follies in Concert. I love it and I watch it over and over. I finally saw a staged production presented by the Blue Hill Troupe in October of 2005. It was packed on to a small stage and was produced with less glitz than probably called for, but still I loved it. It was absolutely wonderful and such a revelation to see the book in connection with the music. I find myself listening to my Follies mix more than anything else. I don't just listen to the original 1971 cast recording but also the 1985 Follies in Concert recording, 1987 London cast recording and the 1998 New Jersey cast recording. It goes without saying that I mix in Follies songs performed at various Sondheim tribute concerts. Of course, there are all of those lovely private recordings to throw in as well. I find myself trying to decide which Phyllis and Sally I love best. I simply can't choose I love them all. They are all my favorite. They are all different, all the best.

This semi-staged concert production promised fireworks and it did deliver. The legendary ladies who played the older showgirls were fascinating and entertaining, so lovely and funny. Christine Baranski gave us "I'm Still Here" with a perfect mix of sarcasm and boredom. She was funny as hell just delivering her lines. Joanne Worley was hysterical as Stella and delivered her big number "Who's That Woman" under her trademark awning of black eyelashes. Mimi Hines was a perfect Broadway Baby with her hilarious facial expressions. I even liked the dancing. The famous Victor Garber was charming as famous Benjamin Stone. Although his voice wasn't what it once was, I loved seeing him. He is so handsome and after all, he was the original Antony in Sweeney Todd. I loved Michael McGrath. He's short and cute and quite the dancer. I was impressed with his "Buddy's Blues". Victoria Clark was a wonderful Sally. She always sounds great on any soprano number, but she really surprised with her sultry belting of "Losing My Mind". I was really surprised to hear her voice sound so low and voluptuous, although she wasn't the Sally I had in mind, I thought she was good and really showed Sally as a completely different character. I had always imagined Sally to be naive and gullible, but her Sally was moody and self-pitying. Donna Murphy as Phyllis owned this Follies. She was regally statuesque, a perfect combination of dry wit and sadness. I loved her take. I don't know if she's my favorite Phyllis now for all time, but she close.

Our stage door experience with Donna was extraordinary. She is humble, warm, gracious and ever so patient. She took time to sign autographs and pose for pictures. She was talkative too. She said that the little red dress was actually a bathing suit that she saw at Bill Blass's studio when they were picking out the dress for Phyllis. She mentioned it to the costumer William Ivey Long because they hadn't decided on a red outfit for her yet for the "Lucy and Jessie" number. It was perfect - she was as red hot as can be and the costume was perfect. Humbly, she admitted that she never studied dance and that it was hard for her to learn but eventually she could pick it up. Hard to tell. She was fabulous - so sexy and really sold the number. Her "Could I Leave You" was absolutely perfect and she fairly growled the "Guess!" at the end of the number.

My favorite part of both evenings was the mirror song number of "Who's that Woman". There's just something thrilling about a choreographed line of dancers, tapping and taking it home. But every moment was thrilling, from the "Beautiful Girls" to "You're Gonna Love Tomorrow" to the wonderful finale reprise of "Waiting for the Girls Upstairs:. There's just not a moment of Follies that I don't love. Until next time, I'll be back to listening to that mix of cast albums. Sigh.