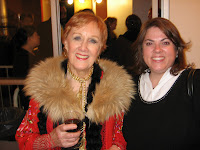 This Saturday night, we'll get a rare treat: we will see Marni Nixon on stage, in person. Best known for dubbing the singing voices of movie stars, Marni Nixon sang the part of Eliza Doolittle in the 1964 film soundrack of My Fair Lady. Marni will play Mrs. Higgins in this weekend's concert version of My Fair Lady presented by the New York Philharmonic, ironically a non-singing role. Last year at a concert at Merkin Hall, I had the pleasure of actually hearing Marni sing live. I practically wore out my cd of The King and I over the years and it was exciting to hear the person who really brought those songs to life. And although we won't get to hear Marni sing this weekend, we'll remember that it's Marni's voice we are listening to the next time we watch Audrey Hepburn in My Fair Lady, Deborah Kerr in The King and I or Natalie Wood in West Side Story.

"Deborah Kerr had been told she was to start the film [The King and I] after the tour of Tea and Sympathy, and she took singing lessons in every town they visited - Boston being a notable exception, as the play was banned there. By the time the film went on the floor she was in good enough voice to handle the lead-ins to most of the Rodgers and Hammerstein songs, with Marni Nixon to handle the high notes and those which needed sustaining. Kerr did the monologue "Shall I Tell You What I Think of You" herself, and it remains as a highspot of the LP of the film, but was finally edited out of the released version, due to excess length. She sang the whole of "I Whistle a Happy Tune" as it was within a range she was able to accomplish without strain, under the musical direction of Ken Darby. 'At least, I think I did,' she says, 'but Marni was so briliant at adapting her voice to mine I could never be entirely sure whether it was she who was helping me on the high notes - with the help of the expert sound mixers, of course - or whether I myself was repsonible for the sounds which came out in the completed version. I know she sang all of "Hello, Young Lovers" which is a really difficult song to sing because it's so sustained, and I helped out on "Getting To Know You". It was a fascinating experience to watch Marni; she is an actress with her voice and exquisitely musical, and I used to sit with her in the sound booth and marvel at the way she managed it all. She became a star in her own right, which is only as it should be - no such talent should be confined to helping out people who are not strictly singers at all. She sings Lieder and those incredibly difficult atonal French songs brilliantly; Marni really deserves her recognition as a unique talent in the musical world'."
at 3:55 PM