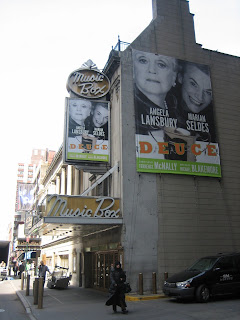 Rather than a grand slam, the first preview of Deuce was an exhibition game. It's a small, lovely play, at times laugh out funny and at times poignant. It never reaches a very dramatic point, but its a fun evening. The premise is that two retired doubles tennis players meet again after playing their last game together over 30 years previously. They are being honored at the US Open as pioneers in the Women's Tennis Association. It's a chance for them to catch up on their lives and re-hash some of the triumph and some of the hurt of their career. The lines are volleyed back and forth at a somewhat choppy pace. Marian Seldes is calm and beautiful on stage. She is the epitomy of grace and peace. Her character is prim and proper and satisfied. Angela Lansbury is more edgy and intense. Her character is arrogant and seemingly the classier of the two, but she serves up four letter words like an ace. Her character is angry and unforgiving. Three characters lend support - two annoying announcers and one tennis fan. The fan recognizes what they were and what is gone. The last words of the play are delivered by the fan as the former double partners have just been recognized at the Open: Look at them, you will not see their likes again.

The ladies received a warm reception as the curtain rose and a standing ovation from a packed house at the curtain call. Both ladies stumbled over a word or two, but there did not seemed to be any dropped lines. Really not unexpected, especially for a first preview. I expect there may be a few changes and I expect that the actresses will gain an all-court advantage. For legends of this stature, a large show is expected, but it is small and understated. And maybe that's just the way it should be. Welcome back Angela. And thank God you've got a stage partner in Marian.

(The stage door was packed. It was most entertaining to hear the gasps and whispers of "Oh my God, it's Angela Lansbury!" from people walking by after other shows.) 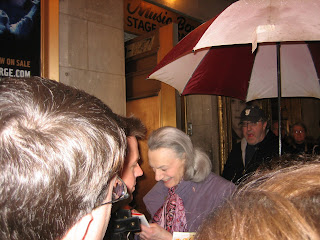 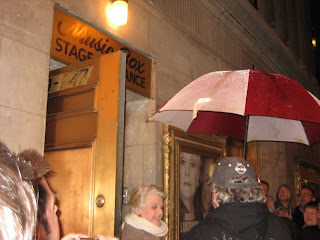 Angie looks luminous in that candid. Looks like 1966 all over again.

You have become the paparazzi queen of NYC.