A Gypsy Closed on this Date 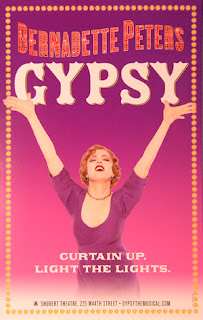 May 30, 2004 is the day that my life changed. It was the closing performance of the third Broadway revival of Gypsy. It was my third time to see the production - the first show that I was seeing multiple times. I first saw this Gypsy on January 16, 2004. My friend Beth, visiting from Texas, was with me. We had decided to see a show and I chose Gypsy because I knew the 1962 film version of Gypsy starring Rosalind Russell and also because I knew Bernadette Peters from the 1982 Annie. As soon as Bernadette sang the first words to "Some People," I was a goner in my mezzanine seats. I was completely enthralled by the production and Bernadette's performance. The next day I purchased the cast recording. On April 13, 2004, I impulsively saw Gypsy again. I had just about worn out my Gypsy cd. This time my seat was H101 in the orchestra. I was stunned when Bernadette stomped down the aisle right by me as she yelled out, "Sing out Louise!" That night I started surfing for information on Bernadette and came across a lovely fan site dedicated to Bernadette. I started lurking there and reading posts from other fans. I finally registered as a member early in May. When the closing date of Gypsy was announced, a number of the fans started making plans to meet in Shubert Alley. I had never met anybody from online before but I was too intrigued to meet these other fans devoted to Bernadette. I also had never been to a stage door. So, I immediately recognized Noah from his picture (I thought was 14!). He was with Vicki. The three of us became fast friends. We watched members of the cast hanging out in the Alley and talked to some of them, including John Dossett (Herbie) and Kate Buddeke (Mazeppa). It was clear that the cast wasn't simply sad because they were now unemployed, but because they wouldn't be with their beloved Bernadette any more. They had become fans of her just like us. We even saw Stephen Sondheim walk by and Noah took off running after him. He came back to us, breathlessly exclaiming, "I shook Stephen Sondheim's hand!" Then the star arrived. Her hair was wet and she was smiling. She took time to greet fans and sign memorabilia. I was astonished by her generosity, especially considering that she was about to go in to perform this incredible character one last time. The experience of being in that theater on that day is one that I will never forget. The audience was packed with fans, friends and theatre lovers, all there just to be a part of it. The air was charged and the audience showed their appreciation at every possible moment. Even the pit orchestra conducted by Marvin Laird got a standing ovation after that glorious Gypsy overture. The minute Bernadette called out, "Sing out Louise", the audience was on its feet, fairly lifting the roof with its applause. It was the first time I had ever experienced such love for a star in the theatre. It was almost overwhelming and I can't imagine how she or the cast managed to continue on with their lines. But the cast gave the probably the best performance of the run, probably of their lives, and made it through. The whole day is unforgettable for me. That day marks the beginning of my journey into theatre history and devotion to musical theatre and its performers (especially to Gypsy); the real start to traveling to see a star; and best of all, the first day of wonderful friendships that I know I will treasure all of my life.

Sarah, Your story sent chills down my spine. Thanks so much for sharing - what a great opportunity for you to be in that very last audience.

I remember when I saw Ms. Peters in Gypsy -- it's one of a handful of performances that was so magical that she literally stopped the show with "Rose's Turn" as the audience gave her a prolonged, well-deserved standing ovation.

Your story brought back the flood of wonderful memories for me! And it speaks to the reason why this show ranks as one of my all-time favorites. Thank you so much.

I didn't realize that I was there for your first experience of Gypsy. And to think, I got you to go to the opera with me, too. That was a fateful trip.

What a wonderful story. Your very detailed description makes me understand why that day was so memorable for you. Thanks for sharing the experience.

What a fantastic post. It perfectly captures all of my six times seeing Gypsy. Gosh I adored that production!