Another Gypsy Opened on this Date 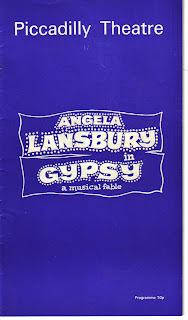 From Martin Gottfrieds' Balancing Act: Angela Lansbury: Rex Reed came over to spend the 1972 Thanksgiving in Ireland with the Shaws and promptly saw an item in the International Herald-Tribune about a planned production of Gypsy in London. Reading it to Angela, he pronounced it perfect for her, a great role in a great show, and it would not take her far from Ireland. She knew all about it, she told him. "They asked me to do it. I turned it down." "What? Are you nuts?" he cried, adding with a certain amount of hyperbole, "This is the greatest part ever written for a woman." He sat her down for a long talk about the fabulous songs written by Jule Styne and Stephen Sondheim - "Everything's Coming Up Roses," "Together," "Small World," "Some People," "You'll Never Get Away from Me," and the marvelous eleven o'clock number, "Rose's Turn" - and with exaggerated patience, Angela replied, "I know all about those songs, Rex. The cast album was a treasure in my house, but I can't sing that role. I can't sing like Ethel Merman." The legendary Merman had originated her role in Gypsy in 1959. It was the singular triumph of her career, Reed acknowledged, but argued, "The British don't even know who Ethel Merman is. Gypsy has never been done in London." That much was true. Merman had declined to perform it there in 1961 (because her leading man, Jack Klugman, with whom she was smitten, wouldn't go), and had declined again when asked to star in this revival. Reed also pointed out that Arthur Laurents and Stephen Sondheim were Angela's old Anyone Can Whistle writing and directing team. She wasn't thrilled about Laurents and hadn't forgotten that they'd not had the best of times on that show. Even so, Reed made so strong an argument, with Peter (Shaw, her husband) concurring, that she promised to reconsider. She was even "willing to give Arthur a shot."

Not long afterward, when her casting as Rose had already been announced, Angela ran into Ethel Merman at a party. "I hear you're going to do Gypsy," Merman said. The moment might have turned awkward but Angela replied, "Nobody but you can do Gypsy, but I'm going to have a go at it." Four months later, in April of 1973, she was rehearsing in an old military training hall for May opening at London's Piccadilly Theatre.

Arthur Laurents knew that Angela was loath to compete with so historic a performance [as Merman's]. Merman owned Gypsy the way Marlon Brando owned A Streetcar Named Desire, or for that matter, the way Angela herself owned Mame. It would take more than these fourteen years for Merman's fearsome shadow to fade from the role. Then again, had not Rosalind Russell owned Auntie Mame a mere six years before Angela wrested the character from her? Laurent's approach, in directing Angela, was to make the part seem fresh by emphasizing its dramatic nuances rather than the songs. Rarely modest, he believed that "A lot of my dialogue is elliptical - it has enormous subtext." He was able to point out the levels that Merman had never explored. "Angie was challenged," Laurents says, "by the stupidity and vulgarity of Rose. She could play stupid," he says, but the vulgar aspect was not as accessible to her. "It's very hard to find any vulgarity in Angie." Merman had no such problem; as Sondheim put it, she was "innately vulgar." The lyricist also understood how Merman's practically mythic performance might intimidate Angela, even if the London audiences had never heard that unique voice. At the same time, he appreciated the difference between Lansbury and Merman as "the difference between an actress and a comic. What people don't remember about Ethel is that she was a comic - a comic with a big, brassy voice." As an actress, though, he called her "the talking dog." Laurents draws his own distinctions between the two with his usual shark-toothed brilliance. "Ethel," he says, "was basically the same in every scene. She came on, she screamed and yelled, and she went off. And Merman had a habit of tapping her foot when she was singing. When you're supposed to be begging your father, and your foot is tapping away, it isn't exactly right. But Angie had all kinds of subtleties."

As the London opening night approached, Angela, rather than growing anxious, was relaxed and confident. At the final preview, she was not even fazed when a fifteen-foot pipe, fitted with heavy spotlights, came crashing down just yards from her, in the midst of a scene. Her concentration was so focused that she continued without interruption. But things were different on May 29, 1973, the actual night of the premiere.

That first night was an excruciatingly nervous event for me. Here I was, coming into London playing the great Merman role in a Gypsy they had never seen. It was a dynamite situation in every respect, because I had to sell myself to those critics. The night was a tremendous success, made so especially by a group of people called, "The First Nighters." This is a famous group of theatergoers who attend every London opening. They sit up "in the gods" and they just took to the show, screaming and yelling and stamping and carrying on. It was unbelievable, and the reviews were terrific. London took me to its heart, but not the way it happens in New York. You're not the celebrity, you're the actress, and I was given the critical greeting that I had hoped for. And also they gave me the Plays and Players Award. 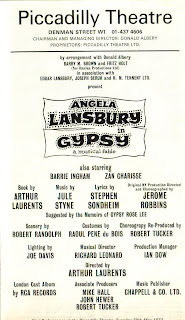 By the way, Arthur Laurents is directing Gypsy again this July when Patti LuPone gives it a go at City Center. I bet he gives her the same treatment. I can't wait!
at 8:12 AM