Last night, two legends opened on Broadway: Angela Lansbury and Marian Seldes. Why historic? It was the first time since 1983 that four time Tony winner Angela opened in a full Broadway production. Marian was last seen on Broadway in the revival of Dinner at Eight in 2003. The play they are in is Terrance McNally's Deuce. Deuce hasn't garnered much approval from critics understandably. It's an entertaining play with a few great moments brought out by these two stage legends Lansbury and Seldes. This was my third time two see the play and it did get better over the last few weeks. It's still choppy at times but there were a few re-writes to give us a little more character depth. Why see it? For the performances, for the legends, for the fun of it. This was my third time to be a First Nighter. Opening night is thrilling! Celebrities and socialites come out in their finery, there is paparazzi and the house is packed with friends and family of the stars. I saw so many exciting celebrities - Liz Smith, Cynthia McFadden, Cindy Adams and more. I even walked in with Doris Roberts - she looks exactly like she always looks and is so cute.

Speaking of paparazzi, I met my blogger friend Hugh from Confessions of a Paparazzi Etc! As I was leaving the Music Box Theatre, I was watching Nathan Lane and Victor Garber when across the crowd I saw a photographer who looked familiar. Finally, we met in person! I acted as his assistant, putting names with faces, for the rest of the evening as he snapped some great photos as seen below and at his home on the web at Confessions of a Paparazzi. If you borrow any of these photos, please credit Hugh. 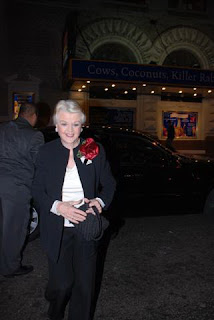 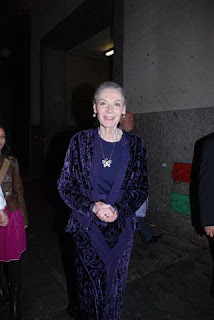 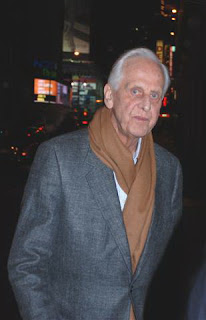 The Incomparable Mary Louise Wilson, currently starring in Grey Gardens
and Tony Winner Dick Latessa. Mary Louise was "Tessie Tura" in the 1974 revival of Gypsy and was also Angela Lansbury's stand by for "Rose". What a thrill to finally tell her how I love her performance in Grey Gardens! 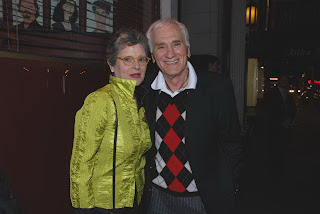 Tony Winner Harriet Harris and Edward Hibbert. Both alums of Frasier, I saw Harriet last year in Angela's An Evening with Dorothy Parker and the Kennedy Center's production of Mame. I saw Edward in The Drowsy Chaperone and plan to see him in Curtains soon. 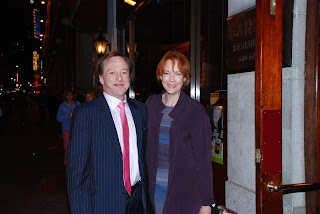 Everybody always wants to be close to Nathan Lane. He just draws people to him. I'm surprised you can't see me in this picture because I was standing so close to him that he kept looking at me. That happens a lot at Angus McIndoe's where I often end up having dinner at the table next to him. He's a part owner there. Hopefully he returns to Broadway soon because that's where he belongs. By the way, the big man with grey hair and his back to the camera is Victor Garber. Victor was the original Anthony in Sweeney Todd, which starred Angela. I saw him in February in the wonderful Encores! at City Center production of Follies. 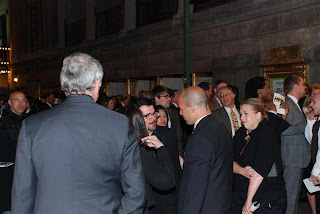 And the piece d'resistance! The Divine Barbara Cook. Oh, how I love Miss Cook! On May 22, her new album No One Is Alone is released. This is a collection of "mostly new to her" songs from her latest round of concerts. I have had several lovely encounters with her and she is always gracious. Noah and I were fortunate to be at her debut at the Metropolitan Opera last year and will be at her 80th Birthday Celebration at Avery Fisher Hall in November. Hugh is just the sweetest to photograph us together. I shall treasure this shot. 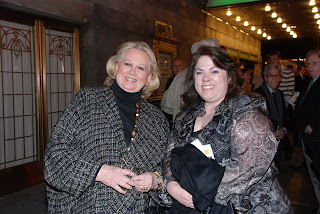 *Did I mention that all of these photos are by Hugh at Confessions of a Paparazzi Etc? Please credit him if you borrow these photos.
at 6:20 AM

Looks like an incredible evening. What an honor it must have been to be twinkling among so many of our brightest stars.

Great pics, Sarah! Broadway is alive and kicking with such great and deservedly weel-known faces.

what great photos! Such an amazing night for you...thanks for sharing!

Wow, looks like a fabulous evening-of course with Angela Lansbury anything is fabulous!

Once again a great blog entry!! Thanks also for the pictures, Sarah. Beth. PS is this Digest with the article on Angela online?? Beth beth_cornell@excite.com. Email me please. Thanks.