The Year of Magical Thinking on Broadway

There she stood, in silver, white and grey, against a black curtain. Vanessa Redgrave. This actress whom I have loved in Howards End, Mrs. Dalloway, and If These Walls Could Talk. This actress who makes everything look graceful, beautiful, gentle. This sister and mother of actresses Lynn Redgrave, whom I loved in The Constant Wife, and Natasha Richardson, whom I saw in A Streetcar Named Desire. They all make me want to see plays, me who is not a playgoer but longs for musicals. They make want to see the depth and the emotion and the humor.

And now she is the voice for Joan Didion's words in The Year of Magical Thinking on Broadway. I haven't been able read The Year of Magical Thinking, the book published in 2005, which is the memoir of loss of husband and daughter behind this one-woman staging. It is a staging. It is a monologue. It is hard to say it's a play. It is too real, it is not "playing". Really, it is too real, especially when the actress is crying as is most of the audience. I couldn't read the book because it was and is too soon since losing my own father. She travels to and from history of their lives, remember happy times, worrying over things she should not have said or maybe should have done. She says you will know what she knows and it is true. She also says that you have to learn for yourself. And that is true too. The only thing that broke the journey, or maybe provided relief, was the layers of silk curtains behind her, gradually becoming lighter and brighter in color, falling and being swallowed into the floor of the stage. Lighter and brighter in color. The grief of her loss was still there but it was fading. Her days were becoming brighter. And yet she kept sitting there and then standing there, still continuing to tell us how it only became worse, a loss followed by a loss. There is a sign outside the theatre taken from a review that it is a theatrical miracle. The work is not a miracle. It is just a fact of loss. But, Vanessa Redgrave is pretty miraculous. 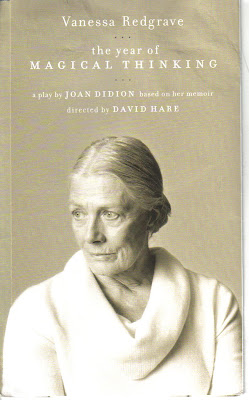 I'll be anxious to hear what you think, as well as whether you read the book in advance.