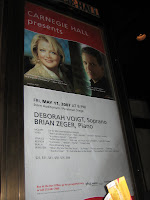 I really do love recitals. Concerts can be thrilling, but recitals are so intimate and perfect. It's all about the voice, enhanced by the piano. Deborah Voigt, with Brian Zeger as her accompanist, gave us more than her voice at Carnegie last night. I never heard such a huge voice sound so beautiful. Still, I got the feeling that she begrudgingly gave us Verdi and Strauss, because she can and is expected to. She trudged through so she could give herself Respighi, Beach and Bernstein. How can such a big voice sound so tender? Her control is astonishing. When she got to the Bernstein, she left her recitalist job behind and became an entertainer. She saved the real fun for her encores - with a Ben Moore song that she and Brian premiered - something about "the pianist is content behind me". It was a complete riot! Brian broke into Rachmaninov and challenged Debbie and it just became hysterical. She gave us a beautiful dose of Strauss and then she thrilled us with Berlin's "I Love a Piano", especially when she joined Brian on the piano bench and played a duet with him. No doubt about it, Deborah Voigt was born to entertain. 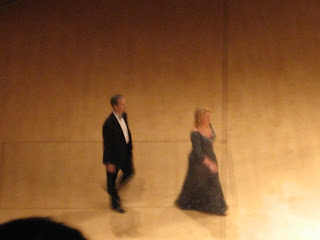