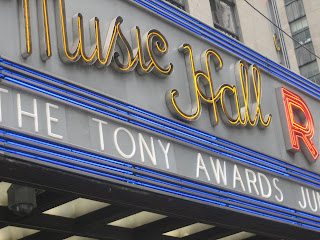 3:15 - Update: In just four hours, we'll hear who the winners are among the 118 nominees for the 2007 Tony Awards. It's a fabulous show this year! The opening musical number is out of this world. Angela Lansbury is opening the show with a welcome as well as presenting the Tony to the Best Musical and then closing the ceremonies, but without song and dance as it was previously rumored. We had orchestra seats this year, next to the section where the musical shows assemble before their full dress rehearsal. It's so exciting to see all of the performers from the various shows mingling together, greeting friends and taking pictures of it all. Most of the presenters wander in and out of the "Talent Holding Section", the likes of Bernadette, Angela, Bebe Neuwirth, Harvey Fierstein, Christopher Plummer, Jane Alexander, etc. I love being included in this event. It's long morning that passes too quickly in a flash of friends, celebrities, nervous people, excited people...it's the best opportunity to celebrate the business and honor achievement and the actual broadcast is just icing on the cake.

My friend Hughe has gorgeous photos of various presenters and performers at Confessions of a Paparazzi. Take a look!

However, where's LuPone? Thought she was a presenter this year?

Oh she didn't need to PRACTICE!