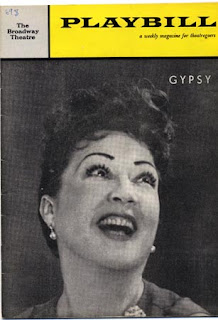 When Oscar Hammerstein saw the out of town tryout of Gypsy in Philadelphia, he advised Sondheim and Laurents
that they had to "give Ethel a hand" after "Rose's Turn"
- meaning that they had to put a "button" on the number, an ending to let the audience stand up and cheer. The writers were appalled by the sugggestion that with such an ending they make their mad scene a musical comedy turn. Sondheim told Hammerstein, "That seems dishonest to me." "Yes, it's dishonest," Hammerstein replied, "but there's also theatrical honesty and an audience out there and if you want them to listen to those last two pages of dialogue [after the song] then you've got to give them their release at the end of that song."* So when I jumped to my feet for Bernadette's Rose's Turn at the Shubert in 2004 and Patti's Rose's Turn last week at City Center, I couldn't help it. It was necessary and I was obligated to stand for it, even if it was involuntary. Hammerstein knew it would happen before the show even hit Broadway. In fact, Gypsy, or rather this character of "Rose", is so special that in 1959 an audience felt obligated to stand in ovation before Merman even sang one note: "The Winter Garden Theatre: Sunday afternoon. Theatrical history is about to be made. There's nothing but a bare stage - no scenery, no lighting, no costumes. In a time-honored theatrical tradition, the cast of a Gypsy is about to do a run-through of the show for the casts of other current Broadway shows. Gene Foote remembers Merman entering from the back of the house in a simple but elegant beige suit, while the other performers all wore standard rehearsal clothes. 'I was just sitting there, not really expecting much, and then, from the back of the theatre, you heard, 'Sing out, Louise!' - and the entire audience stood up. Nobody said anything. You didn't dare. She got this ovation, and I think she said, 'Thanks,' and then just went on with the show. It was one of the most incredible things I've ever seen in my life. Nobody applauded. The ovation was just everybody standing. You heard this voice, and everybody just came to attention. I remember walking out of the theatre and remembering that score - one hit after another - and that day they were just played by a piano. Incredible.'"**

Love that Playbill!! Must be worth a mint these days.