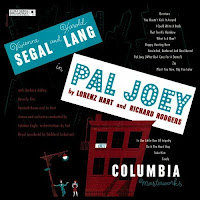 I'm thinking about Pal Joey. Rodgers and Hart's Pal Joey first hit the Broadway boards in 1940 and ran for just under a year. Unbelievable that it didn't run longer really with a cast of Gene Kelly as the young lover Joey, Vivienne Segalas the older woman Vera, Van Johnson and even June Havoc (the real Dainty June!) as Gladys. (It completely cracks me up that June was in the show because there's a song called Zip all that's really all about June's real life sister Gypsy Rose Lee.) These were the days before cast albums. In 1950, Goddard Lieberson, that legendary producer of cast albums, decided that Pal Joey was worthy of a studio recording, with Vivienne Segal reprising her role as Vera but with Harold Langtaking over as Joey. The highly successful recording brought about revival in 1952. Vivienne again took on the role of Vera and Harold was cast as Joey. Helen Gallagher won a Tony for the role of Gladys. Bob Fosse was Harold's understudy! This production opened on January 3, 1952, and ran slightly over a year for 540 performances. Hollywood made a rather unmemorable a movie version of it in 1957 starring Frank Sinatra as Joey and Rita Hayworth as Vera. The stage production was revived twice more in New York, an off Broadway run of only fifteen performances at City Center in 1963 and what is considered a Broadway flop in 1976 that ran for only 73 performances. In 1995, Encores! at City Center staged a production of a cast album starring Patti LuPone as Vera and Peter Gallagher as Joey.

Now there has been talk of a new revival since fall of 2006. Last November, chatters from various Broadway related boards talked of a reading with with Bernadette Peters as Vera, Christian Hoffas Joey and Cyndi Lauper as Gladys. In February 2007, a flight attendant with an online journal reported that she served Bernadette in First Class and that she just happened to be reading "a script of Pal Joey which she is considering." In June, Playbill via Variety reported that Christian Hoff would likely star in a new revival of Pal Joey, but mentioned no other casting news. Now Playbill still surmises that a revival will happen but not until spring 2008. There is still no mention of any other casting. All of these reports, gossip and otherwise, are like a dog with a bone to some of us. Could it be Bernadette? Or some other unemployed musical theatre star of a certain age? I vote for Bernadette. I would love to hear her sing Bewitched, Bothered and Bewildered, say a few dozen times on the Broadway stage. Of course, Bewitched, Bothered and Bewildered, arguably the most famous tune from this show, has only been covered over a hundred times. I wouldn't mind to hearing Bernadette wrap her signature vocals around What Is A Man. Click here to hear Vivienne Segal sing it.

Relevant update: It's in the news again today. Will Roundabout Save Pal Joey Revival?
at 7:33 AM

Email ThisBlogThis!Share to TwitterShare to FacebookShare to Pinterest
Labels: Bernadette Peters, Song of the Day

Sarah - I'm looking forward to the revival, whenever it happens.

And isn't it amazing that June Havoc had been in it? Even more amazing is that she's still with us at the age of 93!

Bernadette AND Cyndi... TOGETHER? I'm there.