Yesterday evening Robin and I attended the taping of this Friday's The Late Show with David Letterman. Just like the other seven times I've been over the last six years, it was a blast and a half. The guests are Rachel Ray, Frank Rich and Arctic Monkeys. Although Frank was there to promote his new book, Dave questioned Frank about his former job as the drama critic for the New York Times. I loved hearing his theatre stories. It's pretty heady thing sitting in The Ed Sullivan Theatre. And yes, Dave really does keep the theatre extra cold - perhaps below a very chilly 60 degrees. As Dave has said, "We like to keep our comedy fresh." Late Show just celebrated its fourteenth year on CBS and Dave and Paul Shaffer
have been together for 25 years. And yes, it's still fresh, in more than one way. 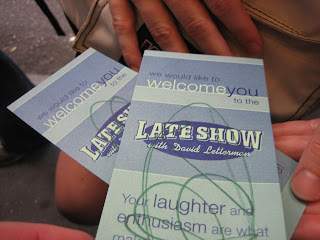 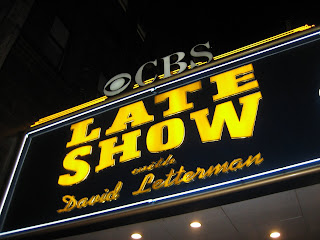 Coincidental Sighting: On Saturday night, Robin and I were walking near Columbus Circle when Paul Shaffer and his family walked by us.
at 8:23 AM

Cool! I love the Arctic Monkeys! How was Rachael Ray? Perky? I still like her, but it helps that I never watch her on TV or buy any of her products, and also I've never run into her at Dunkin Donuts.

Rachael Ray is an overdose of perky. She didn't cook, just plugged her new season of her talkshow and all the gigs she has on the Food Channel.

I can't believe I missed you. I had just arrived in town, stopped at Letterman long enough to see Rachael go in and ignore the press photographers. One of them called her a bitch. 5 mins later her PR person brought her out, and apologized, saying that RR didn't want people to think she was a bitch just oblivious that anyone would want her picture. She posed and smiled. I took a photo of the line up, I bet your in it.