Tonight: Renée Fleming in La Traviata at the Met 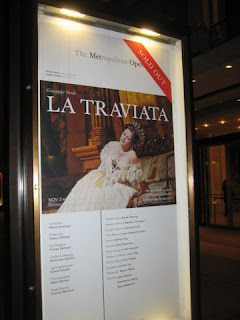 The singing was big and rich, fitting for the Zeffirelli
production. Matthew Polenzani was wonderful and I really like his tenor. It's full enough when it's high without a pinched sound. He's also cute and it's believable that Violetta would want to throw away life in the fast lane to shack up with his Alfredo. I love Dwayne Croft, although I never realize it's him when he's on stage. I've seen him many times and he's always so solid in his performance that there is nothing to disappoint. If I were the heroine of any of these stories, I would always choose the baritone over the tenor. But anyway, La Traviata is all about Renée as Violetta. She is perfection, always delivering the most delicate trills, the spine tingling pianissimi and of course the most thrilling coloratura. Her Violetta was lovely, the belle of the ball and she knew it. When she was sick and dying, she was pitiful and full of self-sorrow and self-pity. But she took me along with her and I believed it. I didn't think I would like the production since I saw it last year, but it was like seeing it for the first time and oh, was it was worth it.

Sally, Kari, Noah and I went backstage to greet Renée as we are usually lucky and privileged to do (Noah's first time to meet her!). As we crossed the second barricade, Kari and I stopped dead in our tracks because ahead of us at the end of the hall was ELAINE STRITCH. I'm sure my gasp could be heard through out the corridors! Upon regaining our composure (who were we there to see?) we approached cautiously, as one should always do when there is such as Stritchay in the vicinity (not that I've ever been closer, but I know better). We were delighted to find her wearing her little hat as usual, leggings and a sumptuous fur coat. My friend Michael Stinchcomb was standing with her and saw me as we approached. He turned around and winked at me and we caught up for the briefest second. Stritchay announced that she couldn't possibly wait to see La Diva in the green room as it "would be too crowded." Stritchay gets what she wants and she headed toward the dressing room and Michael followed her. But Michael often goes where many of do not so I didn't necessarily think he was with Stritchay. So, we took our place in the redecorated green room - less green and way less plaid, thank you. We passed the time by talking about Stritchay and visiting with other attendees.

Suddenly I heard my name being called by Michael. I (ME!) was being summoned to the door to meet ELAINE STRITCH! "I just had to meet you because Michael tells me your a big Broadway fan." OH MY GOD. I know I was smiling and I know I responded appropriately, but all I could think of was, I'm standing face to face with Stritchay and she just shook my hand and it's really soft and she's wearing fabulous round glasses and she really does have on her little hat. I remember that I did manage to point out Kari and Noah who rushed over. We told her that we would be coming to see her at Café Carlyle in January. She said something like, "How can you afford it?" Kari and Noah told her that they had seen her perform. Noah said, "I saw you in your At Liberty show in Boston" and she responded, you saw Elaine Stritch at Liberty? It is her show after all so she should use the complete title. They talked about how long it had been since that was all started and she said she's back in rehearsal and it's hard to remember it all now. I have faith. She told us to be sure to stay and say hello after. Oh, you bet we will, Stritchay! She and Michael took their leave and I gratefully blew him kisses. MICHAEL, I OWE YOU ONE.

We managed (couldn't really get over how lovely Stritchay was to us!) to settle down in time for La Renée's entrance. How many people in the green room? I think around 20 or so. She admitted that she was drained after the performance - well, no wonder, dying takes a lot out of a diva - but she looked fabulous, casual, but glamorous, in a brown turtle neck and black slacks. As always, she was so gracious, so lovely and really just so ordinary. But she's not ordinary, she's much, much more. She told me hello, remembering my name and chatting with me a minute about La Traviata (I got the blouse tug!). Noah introduced himself and it could not have been more special. Before we left, I told her that Michael had introduced us to Elaine Stritch. I know, but I couldn't help it. But she laughed and responded, "Isn't she great?" 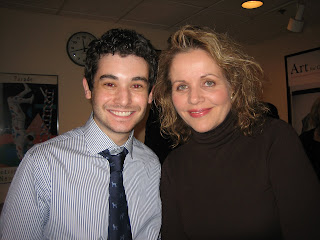 That was WONDERFUL!! Thanks so much :) I'm so happy that one of us was able to recognize a famous person when we saw them lol :D

Fantastic Sarah. I was thinking about you all day and wishing I could have been there with you.

Oh my goodness! What an awesome night! Wow!

So now I need to know - what were you wearing that merited a blouse tug?

What an AMAZING FUCKING STORY. I'm jealous and happy and excited all at the same time.

Fabulous! So glad your night was most memorable.

Sarah, so happy that you got to meet Elaine Stritch! She is just so great! Thanks for sharing this wonderful night with all of us!

I am SO jealous AGAIN!!

It was an incredible evening!!!!