A Decadent Day: A Matinee and an Opening Night

I just took in the first act of today's matinee of Cyrano. I chose to leave at intermission because I worked yesterday (Saturday! Oh no!) and most of today. Tonight, I'm going to Opening Night of The Homecoming. Both plays are full of the language of seduction, but oh my, do they turn out differently. Stay tuned for the report of who was there. 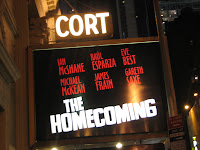 I read Pinter's The Homecoming in preparation of this 40 anniversary revival. It's my first Pinter. All I can say is that I really don't get the draw. It's CREEPY, although there are some funny bits. It's very raunchy, disgusting, and above all, twisted family dramedy. It's unlike anything I've ever seen. It makes a certain other drama about a dysfunctional family look like a Sunday picnic. While I can relate to the family in one, and even know people like them, the characters in The Homecoming are unlike any people I've ever known or would even want to know. I saw a rehearsal of this production on November 25th that benefited Broadway Cares. It was interesting to see the progress of the cast. Even if the material isn't necessarily to my liking, the acting is stellar. Ian McShane is so scary and fierce. James Frain is a wonder. He is always in control, his voice mastering the subtle irony of his character. Eve Best is so subtle, she barely moves her head or makes a gesture, even the blink of her eye is meaningful. Raul Esparza outdoes himself as as a seedy, spoiled character. Gareth Saxe plays slow and dimwitted, perhaps brain damaged, very well. I love Michael McKean. He plays the only decent chracter in the bunch.

The house was full of stars for opening night - perennial first nighter Marian Seldes was there, of course. What a night at the theatre be without dear Marian? I told her that I'm planning to see her tomorrow night at the reading of Pygmalian at Project Shaw. She told me, "Write nice things so Noah will produce me in something." Marian, have no fear. Among the celebrities I saw: Deanna Dunagan, Susan Graham, Chris Noth (who is even more handsome in person), Tamara Tunie, Frances Sternhagen, Joan Rivers (who out-glammed everyone in the house), Anthony Edwards, Eddie Kaye Thomas, Stephanie March, Zeljko Ivanek, Tyne Daly, David Selby...

I was invited to the party at Bond 45 but I'm dead tired. Me, pass up a party? Well, I have to be at the office at 7:00 tomorrow and have a lot to cram in this week - Pygmalion! Sweeney Todd! Office Party! Christmas shopping! A flight to Texas!!! Oh dear.
at 5:13 PM

Wow, Chris Noth! That is so exciting! He's pretty darn handsome on tv, so I can't even imagine how much more handsome he could be in the flesh, so to speak!

Wish I could see this. I loved Eve Best in "A Moon for the Misbegotten." As much as I love Kevin Spacey, she was such a revelation.

And of course Marian Seldes was there. How could she not be! I feel so fortunate to have seen her in the audience at "Gypsy." I feel like it was a Broadway rite of passage for me, even if City Center is slightly off Broadway.