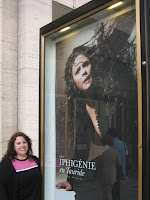 These voices were superb! During her first aria, Susan Graham issued a note in the the most delicate pianissimo I think I've ever heard. We were in row J of the family circle - that's just 3 rows from the very back of the house.* Even from that distance, the power of the timbre of her voice gave me chills. I was amazed at the libretto that seemed to alternate from never ending recitative and arias. Even when Susan was not singing, her powerful presence was unavoidable. Paul Groves has a beautiful tenor and it was nothing short of thrilling to hear Placido Domingo. It is unbelievable that he has sung 124 different roles. As Sally said, the drama is a bit static, but the music is glorious. It washed over me, ebbing and flowing through the pain and triumph of Iphigénie's life. As usual, the slowness and quietness of this baroque-style opera is a little too little for me and nearly lulls me to sleep (just like Rodelinda and Julius Caesar) and it is the sound that moves me more than seeing it. This new production by Stephen Wadsworth is interesting, but still too slow. He attempts to elevate the drama by directing the priestesses into frantic choreography. He introduces a dream sequence that is visually beautiful but doesn't quite dramatize. Overall, the reason to see this production is really to hear Susan, Placido and Paul.

It was almost a zoo backstage. As my friend Michael said, half of the audience came back to see Placido. We eventually made our way to Susan's dressing room. She's looking gorgeous as a blonde and was just as bubbly has ever, making it almost impossible to believe that she had just been performing an intense drama for the previous two hours. She's just as fun and lovely as ever. I was excited to introduce Noah to her, as he is a new fan of hers. As we were leaving, we saw Harolyn Blackwell waiting to visit Susan. Then, further down the hall on the way out, we encountered Maestro Domingo! He signed our playbills. In awe, I managed to mumble, "Thank you, Maestro," and he smiled at me. Sigh! Noah pointed out, "It's just another day in the endless pursuit." 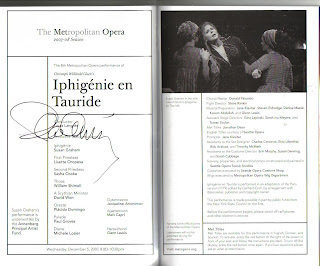 *Dear Metropolitan Opera, Sally and I are subscribers and guild members for a number of years now. Row J? Are you kidding us? We dare you to call us yet again and ask for even more money.
at 7:30 AM

Was this a new production? I am wondering if it was the same one we saw at Lyric last season. Ours had very sparse sets and they wrote on the black walls with chalk? There was a very funny story in the newspaper about Susan Graham taking one of the photos of Callas as Iphigenie and writing underneath it "Now where did I leave my chalk?"

I'm pretty sure that this was a different production. Lyric had the Robert Carsen "black box."

Yes, it IS a new production, as I said in my report. Stephen Wadworth directs. See a video of Stephen discussing the production here: http://www.metoperafamily.org/metopera/season/newseason_video.aspx

After I posted this, I kind of figured it was a new production... because if you'd seen the black box effect with the chalk, my guess is that you'd have mentioned it...

I do enjoy black box chocolates.

Glad you had a great night!