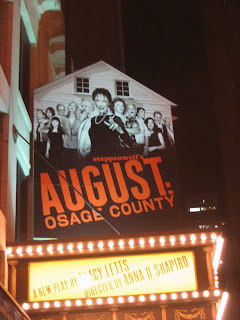 I am beyond thrilled to be attending tonight's opening. It will be my third time, but I already know that it's a charm.

Update:
It was all about STARS at the Imperial Theatre last night. I'm talking STARS on the stage. This cast is remarkable! Making their Broadway debut are Dennis Letts, Deanna Dunagan, Rondi Reed, Kimberly Guerrero and Troy West. Director Anna Shapiro is also making her debut, as is the remarkable playwright Tracy Letts. The reviews are all raves, raves, and more raves!

Some of the stars in the house were Angela Lansbury, Marian Seldes, Christine Ebersole, Elaine Stritch, Kate Buddeke, Bobby Canavale, Allison Pill, Kate Walsh, Joan Allen, Gary Sinise, Alan Rickman (Angela talked to him - he's playing the Judge in the new Sweeney movie so I'm sure she a thing or two to say since she saw it over the weekend at a private screening with Sondheim), Tim Daly, Marsha Mason, Kathleen Marshall, Ana Gasteyer, Lois Smith, John Krasinski, David Schwimmer...others I can't even recall right now! The Opening Night party was at Virgil's...the roof was practically raised in triumph.
at 7:09 AM

So glad you were able to go. But I'm officially jealous!

Damn! I can't believe you had to miss this unbelievable night!

Why was it such a star studded? next time if you think I should be there to cover it, call me. I love shows that bring out the good ol' royalty of Broadway.

Sarah, I can't believe I had to miss it, either. But with my day job lasting into the wee hours of the night lately, I had no choice. However, I have chosen to live vicariously through you!!

Sarah, I'd like to live vicariously through you, too!

I'd say we cut an incredibly elegant figure as the King of the Hill wallflowers until that slob of a photog told us with such grace and dignity that he needed to back up.

Oh what a night!

My dear HughE! It was star studded because everybody who was anybody knew they HAD to be there! The producers just wanted to get this show on the road after waiting out the strike...and the Opening Night just took on a life of itself and bloomed into the deservedly starry night that it was on almost a last minute basis.

And yes, my dear Theatre Aficianado, I have to agree with you about us!

Great to hear about the huge raves for the show!
Where is Noah in the playbill pic, amongst the others?