Renée Fleming with the BSO at Carnegie Hall

Renée Fleming with the BSO

I began the evening at the annual CSC holiday party at the Rock Center Cafe. It's the best party of the season - over 700 paralegals and corporate staff from around the city in attendance. Sated with a wonderful dinner and several glasses of very good champagne, I ran to Carnegie Hall. On my way, I passed the Ziegfield where the Sweeney Todd Premiere was happening - I admit that I was tempted to stay and watch, but duty to La Diva called. The BSO opened with Berlioz' Excerpts from Romeo and Juliet, Op. 17 which was nothing but long. It's a beautiful piece, but was not exactly rousing for this impatient girl, especially when the French Horn section was so completely imprecise.

Finally, on to La Diva. To our delight, Renée wore the green and gold Dior - also the New York premiere of this dress! She performed the New York premiere of Henri Dutilleux's Le Temps l’Horloge for Soprano and Orchestra. It was an exquisite, if not short at only 9 minutes, song cicle. The text is very personal while the music is full of the dissonant sound, almost mournful and mysterious. I found it very listenable, as compared to the Crumb Apparition. While the modern sound of the two pieces was similar, it didn't disturb or shock me. After much lauding for the Dutilleux, the composer himself made his way to the stage for a bow as well. It's thrilling to hear a new piece performed when the composer is in the house and I am always greatful for these experiences. Renée then continued with the Duparc cycle, which she regaled with a lush and creamy voice that fairly floated to us in the balcony. After many bows, she was presented with a bouquet of white roses and took her leave. The BSO continued with La Mer, which Sally and I only listened to from the hallway outside of the stage door entrance. It's no secret that we don't go to these things for the orchestra.

The backstage experience was even more fun than usual. Our group was first in line but La Diva's friends and management team were first to go into her dressing room. We were patiently waiting when I was sort of pushed into the doorway by the attendant, who said to me to "get up to bat". Renée, dressed in dark grey and a brown short waisted double breasted jacket, saw me and invited me in. I suddenly realized that my friends weren't right with me. We both looked out into the hallway and Renée saw her friends. She called them in and I was rather trapped, standing next to her. It was fun to see her interacting with them and meeting some of their friends for the first time. They finally moved on and she talked to me. She wanted to know if I had been traveling lately (alas, no!) and she told me that she had seen Khaleem in Boston. We talked about her Dior dress and she talked about my blouse (a tug or two here). I had her sign her Traviata Playbill for a young singer in Turkey, which she was excited to do. We talked about some other things. In my mind, I always have an agenda of questions about future roles and various performances prepared but none of it is ever accomplished when I enter into her presence. I went back out into the hallway and I'm sure my happiness was written all over my face. I saw another friend of mine, whom I've met through many concerts of Renée and we talked about our plans to see Iphegenie at the Met on Wednesday night. I then talked to my friend Michael. We reminisced about his introduction of Elaine Stritch to me the last time we met. He told me how Elaine was so thrilled that I was coming to see her at the Carlisle. I told him about Noah, in the context of meeting Elaine, and told him about Noah's involvement with August: Osage County. He told me that he had already seen it and how much he loved it. When we parted, I moved further down the line (yes, I have learned to work that line just like La Diva!) and saw my friend Andrea. While we were talking, Marilyn Horne came in. I was so happy to see her! I shook her hand and told her that I had just seen her on television:

SB: Oh Miss Horne, I just saw you on television!
MH: You did? On what?
SB: It was the great moments. It was your great moment at the Met.
MH: Hmmm. What great moment was it?
SB: I don't know. I forget. It was your greatest moment!
MH: Well, there've been some great moments. Okay, you can see that I'm moving to the front now.
SB: Yes ma'am! (Sally arrives.) Sally, Marilyn Horne is here. She looks great!
Sally: Oh!
SB: I just told her I saw her great moment but I can't remember what it was.
Sally: It was the Italian in Algiers.
SB: Go tell her. (Sally leaves in search of MH. Sally returns, unsuccessful.)
SB: Oh, here she comes. Miss Horne, we have figured out what your greatest moment was. Sally, tell her.
Sally: It was the Italian in Algiers.
MH: Oh, well that was a great moment I guess. I had some pretty great moments.
SB: It was on PBS. It was called the Greatest Moments of the Met Broadcasts, or something like that. The public voted on it.
MH: Oh, well, then the public is NEVER wrong!

By the way, Miss Horne looked RADIANT. After, we headed to the Brooklyn Diner. Hmmm, the atmosphere is okay, but the fries aren't worthy. 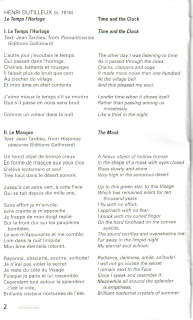 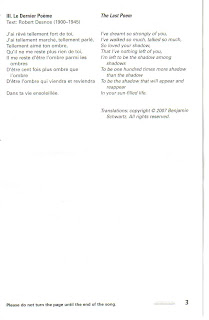