War and Peace at the Met 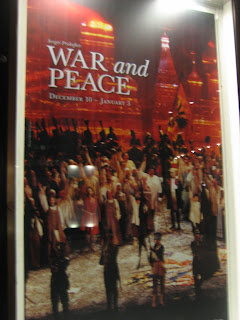 It's been four days since I saw War and Peace at the Met. My mother always says that if you don't have anything nice to say, then don't say anything at all...but a few people are asking me and I can no longer keep quiet. If you want to read something from someone who liked it, read Tommasini's review in the NYTimes. He clearly liked this production more than I did. It had everything that a grand opera should have - dozens of people on stage, lush costumes, beautiful lighting, special effects, a live horse (only 1!) - but it didn't thrill me at all. I admit that I have not read War and Peace, and now I don't want to read it even less. I was nervous about seeing this opera because of its length - four hours, 15 minutes, one, count 'em, one intermission. This was my longest opera yet (stay tuned to see how I handle Tristan und Isolde this spring!) The main thing that disappointed me was that there were no standout, show stopping arias. At least to me there weren't. The story moved at a steady pace and never seemed bogged down, but it did just go on and on. The set was very minimalistic, but interesting enough. This didn't bother me but it didn't do anything for the production. The war scenes were a little too graphic - a pile of dead bodies was just too disgusting for live theatre. And remember that horse? It froze to death and the French pulled it around the stage on a giant cart. Gross. Sally pointed out that the French are very fond of horse meat. Maybe so, but still gross. The worst part of the production was Ramey. Tommasini said, "Mr. Ramey has a wide wobble in his voice these days, but he still brings chilling power and gravity to his portrayal." Huh? That wobble is so wide that you could drive a mac truck through it. For me, it just takes away anything that would be chilling and powerful in his performance. All was not loss, it was opening night and our favorite socialite was in the house. It's also not lost on me that Marina Poplavskaya was making her debut. I love to be in the house for a debut. She has a light and sweet and very pleasing soprano voice. She looks a bit like Keira Knightly, but I won't hold that against her.

So, I won't see another opera until I'm back in the house on January 29, 2008 for Manon Lescaut. Karita Mattila! Yes! Of course, I won't be sitting by, knitting in my living room: opening night of The Homecoming, The Lion King with Cody, a NY Phil concert with Cody (his first classical concert!), Susan Graham with the NY Phil, Barbara Cook with the NY Phil! After all, like Noah says, it's just another day in the endless pursuit.
at 8:01 AM

Maybe it would have been better if it had its original title "War, What is it Good For?" Haha. No, okay, seriously. That's almost exactly how I felt about Frau at Lyric a few weeks ago, despite the glorious singing - too long, too boring, too slow. I think you'll like Manon Lescaut better.

Yuck about the horse! I've never read War and Peace, but I did have to read some Dostoyevsky in high school - either Crime and Punishment or The Brothers Karamazov, I no longer remember which one. Maybe both. Anyway, they were a bit of a slog to get through. It must be those long, cold Russian winters. There's nothing to do but write and write and write!

And I don't think I could have handled 4-plus hours with only one intermission!

I can't wait to hear about Cody's reaction to The Lion King. (I've never seen it myself). What a lucky boy!