Betty Buckley at Feinstein's at the Regency 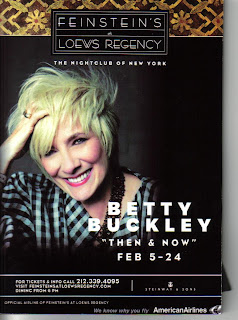 Okay, you know that feeling when you've had too much wine? Add to that and multiply by Pi and that's the feeling I have right now after hearing Betty sing Memory and Meadowlark and He Plays the Violin and As If We Never Said Goodbye and With One Look and a few other quite memorable theatre songs. Turns out that it wasn't her Then and Now cabaret that we thought we were getting but her Broadway Request Late Show that Michael Feinstein mandated. In between songs, Betty told the story behind each song, which were from the shows that she has done. She sang a cool medley, arranged by Kenny Werner, she calls the Family Medley, or the Dysfunctional Medley, that was a combination of Children & Art from Sunday in the Park with George, Stay with Me from Into the Woods and When There's No One from Carrie. She talked about how she got cast in Carrie, which she said was actually a great experience despite the reviews. About Into the Woods, she said she didn't do more than the work shop, "I was only in it for about a week because I was full of myself back then. You know, I was from Texas." She said that Sondheim told her that he wrote Stay with Me for her. She said that she might have been putting too much of Carrie's mother into the witch. When she was in Pippin, Stephen Schwartz told her that he had written this show The Baker's Wife for her. She auditioned for it NINE times. She sang Old Maid from 110 in the Shade for her audition song. She couldn't remember the title of this song so I called it out to her (my professors are going to be so proud!). Eventually, even after all those auditions, the producers ended up choosing Patti LuPone who was just finishing Juliard. She said that years later, Patti heard that she was telling this story about Stephen telling her that he wrote Meadowlark for her. She said Patti called her up and was mad that Betty was singing her song and telling that story. Stephen had told Patti that he had written Meadowlark for her. Betty asked Patti how she could be mad because she had been there for her during the whole Andrew Lloyd Webber debacle when Patti was fired from Sunset Boulevard. They both called Stephen Schwartz and he told both of them that he didn't remember. Patti finally told Betty that they were both too old to be singing Meadowlark anyway. But, you know, they are both still singing it. Somebody requested Rose's Turn, but she wouldn't sing it without an orchestra and the shouting, even though somebody in the audience offered to do the shouting. Instead she sang a jazzy arrangement of Small World. She sang Love Song from Pippin. She put that one in the hat herself just because she always wanted to sing this duet by herself. She sang Whoever You Are from Promises, Promises which she did in London. She was in 1776 and finally had an audition for Promises, Promises. The audition didn't go well but she just had to have another shot at it because she loved Burt Bacharach and wanted to go to London. She snuck out of 1776 and her complicated laced period dress before the curtain call and ran over from the 46th Street Theatre to the Shubert to beg Charles Blackwell to give her a callback. He agreed and actually coached her before her callback. After she auditioned again, and it went well, David Merrick called her back again. She ended up getting the role. Some of the songs were transposed down for her much lower range, but she's still got that incredible belt. It's thrilling when she lowers the microphone to her hip and just let's it go. A man at the table next to us admitted that he was shellshocked. I think that perhaps I must have died somewhere between Columbus Avenue, crossing the park and landing at 61st Street at Park Avenue. 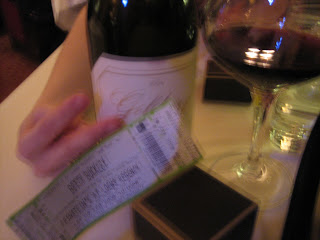 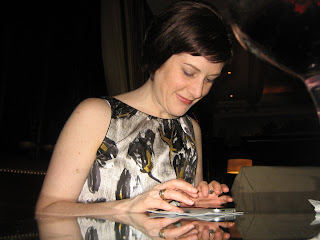 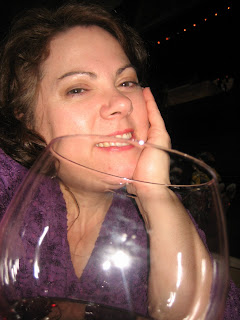 Texting Ravinia Bob! Thank god he answered the phone; my fingers were getting tired.

Ravinia Bob is happy, too!

Hello! We saw (and heard) you there! I was also impressed with her ability to belt some of the songs, (esp. on Memory, but I felt there were too many songs where she was flatting the notes, especially those she had to hold. I wondered if it wasn't that she was a little worn out from the prior set.

I have always enjoyed the intimate club settings like Cafe Carlyle, joe's pub, and The Regency for shows like these, but you really have to love who you're seeing...by the time you've paid for the required accompanying dinner/drink minimum, it's some serious bucks. But it's hard to beat the experience (as you know!) of having the celebrity talk directly to you as you enjoy the show.

P.S. Was she just a little hard on her assistant over the alphabetizing thing with 'Gyspy', or what?