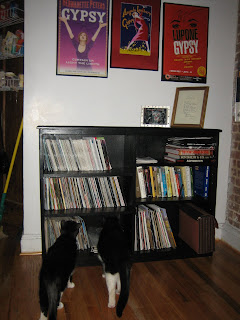 It's been a Super Sunday! While the Who Done It Bowl (19 hours of unsportsmanlike conduct and sudden death!) has been playing in the background, I've been painting my new bookshelf and organizing 2006 and 2007 Broadway playbills. Gee whiz, I saw a lot of shows - over 60 Broadway & off-Broadway shows in each year, not counting opera and concerts. I'm not going to do any accounting on that though.

With all the organizing done (for now), I thought I'd catch up on a little gossip. I came across this fun little game I think I'll play. Maybe one or two of my friends will play along. Blogbuddies, consider yourselves tagged.

The first musical I ever saw on Broadway was (or if you haven’t seen a musical on Broadway): The Lion King

The musical I would most like to see again is: Gypsy

The musical I never want to see again is: Love Music and/or Brooklyn

The best performance in a Broadway musical by a woman I’ve ever seen is: Bernadette Peters in the last performance of Gypsy on May 30, 2004

The best performance in a Broadway musical by a man I’ve ever seen is: Michael Cerveris in Sweeney Todd

The person I wish they never cast was: Daniel Evans in the show Sunday in the Park with George

The person they should have cast was: Manoel Felciano

My favorite Broadway choreography was in the show: The Dancer's Life and/or 42nd Street

The stupidest lyric/line I’ve ever heard is: "Uh - Nessa I've got something to confess, a" from Wicked and/or "Paula, On my knees you're so much talla" from The Goodbye Girl

The first musical I had to go back and see twice was: Gypsy!

The first musical I ever walked out of was: I Love You, You're Perfect, Now Change but if there had been an intermission, I would have walked out of Brooklyn.

The most under praised and overly deserving show in my opinion is: the 2003 revival of Gypsy.

The most overly praised and under deserving show in my opinion is: Avenue Q.

The song show tune I’m most likely to sing while I’m dancing around at home is: "Some People" from Gypsy and/or "When I'm Drunk I'm Beautiful" from Prettybelle and/or "Nobody Does It Like Me" from Seesaw and/or "Loads of Love" from No Strings and/or "Nobody Steps on Kafritz" from Henry Sweet Henry and/or "The Babylove Miracle Show" from Grass Harp.....

If I could recast any role in a current Broadway musical with a performer of the past it would be: Mary Poppins with Julie Andrews

If I could recast a current actor in a Broadway musical that was before their time it would be: Kelli O'Hara in the original Pajama Game

The show they should never change a word of because it is already perfect is: Gypsy (except for maybe "Little Lamb")

The show I'd most like to get my hands on and rewrite is: Little Women. What a travesty that one was. They took a beloved American novel and turned into unrecognizable fluff. And pop songs performed in Civil War period outfits? The only good thing was Maureen McGovern as Marmee - she was true to that staunch and loving character. Even poor Sutton Foster couldn't break away from the dullness of the musical Jo.

HAHAHA, would you believe that I did mine without looking here first? Hilarious.

And I adore Daniel Evans as George.

Sarah, Talk about inspired answers. But I do wonder how Daniel Evans managed to do so well with the Oliviers if you didn't think he worked in the role.

As a blogbuddy, I've answered your clarion call!

But, Steve, I didn't say I didn't think that Daniel worked well in the role of George, I just said I wish he wasn't cast. From the moment the revival was announced - during the run of Sweeney Todd, I had it in mind that Manoel would be perfect as George.

That's a shame about "Little Women." I've seen the cast CD in Borders and I've thought about buying it because I was curious about how they turned the book into a musical. But now, I'll probably just skip it!

And Julie Andrews would have been perfect! Would you bring back Dick Van Dyke, too? Because I really liked Gavin Lee as Bert.