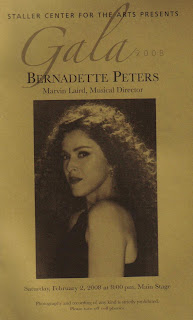 Tonight: Bernadette at the Staller Center. I had not seen Bernadette in concert in October, 2006. Tonight, she was her usual sparkling self, which is just as reassuring as hearing her warm voice. She opened with a rousing Let Me Entertain You , which she promptly did. She sang her usual mix of Rodgers & Hammerstein, Herman and Sondheim, but threw in a couple of new numbers. The first she added because, she said, "Since I'm going to sing at the new Disney Hall in LA and because I have my very own Disney Mouse for all of these years (Cubby O'Brien), I'm adding this new song." It was When You Wish Upon a Star. Believe me, Bernadette's smokey version was infinitely more beautiful and interesting. Instead of ending with Berlin's Count Your Blessings, she sang her own original composition which she wrote as a companion to her upcoming children's book, Broadway Barks, which will be released in June. Bernadette's charity, co-founded with Mary Tyler Moore, promotes adoption of shelter animals. She said that the lyrics came to her when she flying. She sang the song into a tape recorder and her musical director, Marvin Laird, transcribed it and arranged it for her. It's a sweet lullaby she wrote for her dog Kramer, who also graces the cover of the book. 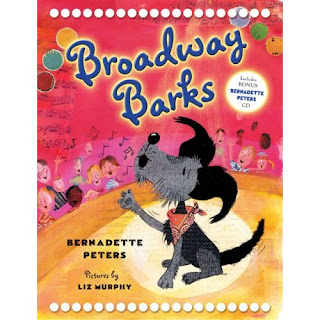