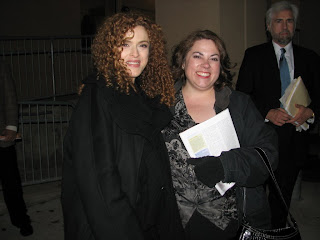 YAY! I'm happy for you both.

Awwww, what a terrific story. And the two of you look great. I know exactly how you feel. If I hadn't seen "Beyond the Sea" and fallen in love with Kevin Spacey's singing, well, you know the rest!

OK, how is it even possible that Bernadette Peters is 60???? Seems like just yesterday she was the"It girl."

That Peekskill concert was something, wasn't it?

Yes, indeed! Happy birthday! She, alone, has redefined what being 60 is.

What a great experience. Isn't it just awesome when the performers are caring and kind people?

Happy Belated to my Juvenile Jury Baby. (I left a cupcake with Marvin)