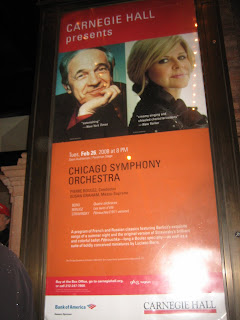 Susan Graham with the Chicago Symphony Orchestra at Carnegie Hall

Susan was sublime. She was dressed in a shimmering chocolate-colored gown. Even her voice was like chocolate, a rich and creamy sauce with just the right amount of darkness. I love her recording of this which she made with the Royal Opera House Orchestra in 1997. It is a perfect recording. Hearing it live is even more perfect. The timbre of her voice has darkened from the bright trumpet to a French horn. She was delicately accompanied by the CSO. She was never once covered and voice sounded stronger than ever. There was no encore, but she was called back to the stage by an adoring audience three times. We ditched staying in the house for the Stravinsky so we could visit her backstage. She was still in her gown which I loved because I forgot to take my binoculars. It was exciting to see her bling bling up close - a ribbon of diamonds tied into a nice fat bow of ice. Very sparkley and a lovely look with the sparkley chocolate, which went very nicely with her blonde hair (I overheard somebody backstage to refer to it as big ole Texas hair). She looked absolutely terrific, tan and relaxed, although she told me that she's looking forward to March 17th when she takes a vacation. She said that she's recording the Death of Cleopatra in May. Symphony Fantastique will also be on that album. She said, "Maybe somebody will actually buy it!" Mark one sold. After our required post-concert time at Seppi's, Sally and I saw the load out of the instruments: west bound and down, load it up and truckin' the CSO back to ChiTown. 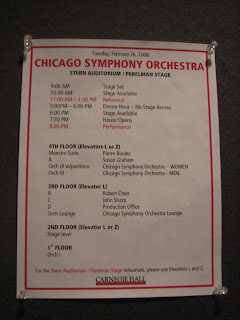 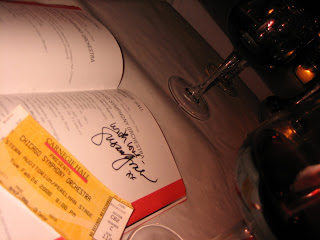 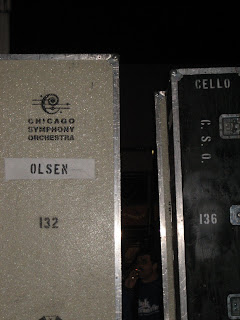 what?
Mary-Kate Olsen was there too?