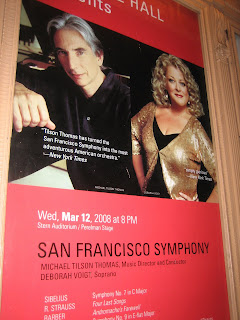 Oh my goodness. Deborah Voigt has such a big voice. It's big, bright and controlled and beautiful. Why the Last Four Songs? As Sally says, every soprano and their dog has recorded The Four Last Songs. Deborah's own recording, Don Juan, Vier Letzte Lieder Tod und Verklrung with the NY Philharmonic was released in 1999. The texts, the first three by Hermann Hesse, the last by Eichendorff, are about being at the end of one's life. Strauss was in his 80s and his wife's health was failing. He wrote the songs with her soprano voice in mind. The songs are about death, but are not maudlin, but peaceful and accepting, almost rejoicing. The melodies are tender, with moments of fiercity. Those fierce moments were delivered as only Voigt can deliver them, fairly rattling the house. Strauss' father was a professional French horn player and all four songs feature the horn. In the third piece especially, Beim Schlafengehen (Going to Sleep), the music is achingly tender. At one point in the movement, the only prominent instruments accompanying the voice are a horn and a bass. Unfortunately, the San Francisco Symphony's Horn Section was having some difficulty at this point. Still, the performance was a triumph. And speaking of triumph, Deborah was fierce on Barber's Andromache's Farewell. Wow. The text is from Euripedes' The Trojan Women. I couldn't help but remember the thrilling performance that Deborah gave last season at the Met in Die Ägyptische Helena.
at 6:27 AM