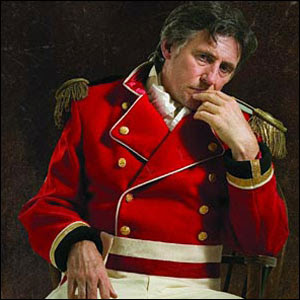 Okay, he looks good in a uniform but can he sing? The NY Times reports that Gabriel Byrne is King Arthur at this May's Camelot with the New York Philharmonic. He's not exactly the one I had in mind to play the King, but at least Nathan will be Lancelot, which may actually be better. Sigh. No Audra McDonald either. Marin Mazzie might be cast as Guenevere. I've heard Mazzie sing a few times at Broadway events and she's got a great voice. Most memorable was her turn at Wall to Wall Sondheim when she and her husband Jason Daniely sang Too Many Mornings. They practically ate each others faces during the song, which was a really a little too startling for me. Hopefully she won't try that with this cast. Although, watching Nathan Gunn kiss is pretty damn hot.

In related news, Camelot will be broadcast on PBS' Live from Lincoln Center on May 8th. La Diva Renée will host.
at 6:36 PM

Not to worry -- I'm not sure I've ever heard anyone actually "sing" King Arthur anyway ;-)