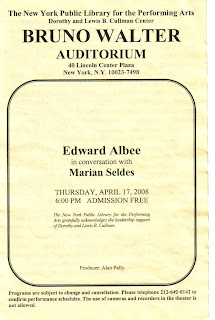 Twenty years after her Broadway debut, Marian Seldes won the 1967 Tony for Best Featured Actress in a Play. The play was Edward Albee's A Delicate Balance. He won the Pulitzer for this play. Since then, she's been in his plays Three Tall Women and The Play About the Baby. Even a year before A Delicate Balance, she understudied Irene Worth in Tiny Alice. The first play Edward Albee wrote was The Zoo Story, but before that he was a poet. Fortunately for us, his poetry career didn't take off and we have Thornton Wilder to thank for that. After reading each of Albee's poems by a pond, with the aid of a bottle of bourbon, Wilder floated each poem on the water. After the entire pond was covered with the poems, he told him that he should be a playwright. Albee said, "I think he was trying save poetry from me." Marian was the interviewer of Edward tonight, but it felt more like being at a party with two funny old friends as they told stories to each other. No doubt about it, those two adore and respect each other. The first thing he said to her, "So now you're an opera star." Her response, "I just like being at Lincoln Center." He said of the movie Who's Afraid of Virginia Woolf, he was promised by Jack Warner that the cast would be Bette Davis as Martha and James Mason as George. He was excited about that casting because at the time, Bette was 52 and James Mason "always played 46" no matter his real age. He also loved the idea of Bette as Martha imitating Bette in the first act of Who's Afraid. He wasn't disappointed by the performances Elizabeth Taylor and Richard Burton, but he said she was too young and he was too old. My favorite quote from Mr. Albee when explaining why listening to classical music is so important, "A play is a work of literature...but it is also a work of music." 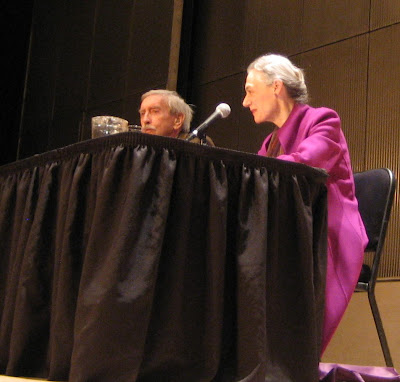