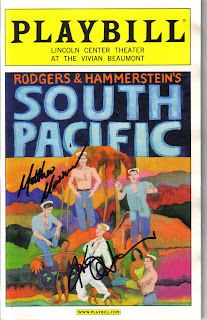 After months of anticipation, I finally saw South Pacific on Friday night. Although I liked it, it has taken me all weekend to summon up words because I have to admit that I was let down. The score and the story did not surprise me as I have seen the 1958 film starring Mitzi Gaynor and Rossano Brazzi countless times. I even like the 2001 tv movie starring Glenn Close, Rade Sherbedgia and Harry Connick, Jr.). I love the 2006 Great Performances semi-staged telecast that starred Reba McIntyre and Bryan Stokes Mitchell. The original cast recording (Mary Martin and Ezio Pinza), the film soundtrack, the 1967 Lincoln Center Theatre recording (Florence Henderson and Giorgio Tozzi) and the 2006 Carnegie Hall recording (Reba McIntyre and Brian Stokes Mitchell) regularly loop in my playlist.

Even though I avoided all reviews, various friends revealed certain set design elements. It was no surprise that the stage floor slid back to reveal a 30-piece glorious orchestra - three French horns, a harp, lots of strings and brass. But seeing that and hearing them live was thrilling. This really was my favorite thing of the entire evening. I was in Row D of the Loge, the next to last row where the cheap seats begin (if you call $65 cheap). One of the reasons I like seeing any performance in any house from seats above is so I can watch the orchestra, particularly the brass. So, this seat was perfect. Well, it was nearly perfect - the very tall man in front of me insisted on sitting forward for most of the show, shifting constantly, despite my requests that he sit back. I eventually gave up and just leaned out into aisle. Not comfortable. The senior citizen ladies from LonGisland sitting next to me were interesting as well - one of them actually saw the original with Mary Martin. They were sweet, but the type who need to point out the obvious, out loud, things that are happening - "Look, she's taking a shower!" These two things might have affected my evening too much, although I tried not to let them.

During the entire show, I kept thinking, "This is lovely." The set and lighting design were absolutely beautiful. The plane and the military trucks on stage were cool without being over the top gimmicks. The set, the sound of waves and gorgeous, bright costumes were terrific. It was visually transporting, despite the distractions around me. The voices of Kelli O'Hara as Nellie, Paulo Szot as Emile, and Matthew Morrison as Lt. Cable- were beautiful. Loretta Ables Sayre as Bloody Mary stole the show, hands down. I thought Matthew was fantastic as well. Danny Burstein as Luther Billis was fine as well, although I didn't find him a particularly natural comedian. I loved that Li Jun Li as Liat performed a hula during Happy Talk, which is one of my favorite pieces. I thought the audience appreciation for Paulo Szot was a little unwarranted, of course my standard for baritones is a bit high. Kelli O'Hara was lovely and I believe that she is the best of the best of Broadway musical actresses in her age group right now. When I heard that she was announced as Nellie, I thought she was perfectly cast. But I wasn't that moved by her. She just seemed tired and too quiet, almost uncomfortable, although maybe the double cartwheels during I'm Gonna Wash That Man Right Outa My Hair were an indication that she wasn't that tired. Maybe it's Bart Sher's direction - keeping everything soft and low-key. I was expecting a fun, no holds barred, rousing and boisterous show, and admittedly it was entertaining, but I couldn't get over how unbelievably quiet and gentle it was. Even Nothin' Like a Dame seemed too slow and quiet. The softness, almost reluctantance, of the singing and acting is what surprised me the most. This is a show about WWII sailors, marines and nurses, Americans stuck in the middle of nowhere 1000s of miles away from home while the world is at war. Again, is it the direction or is it just a problem with the book? They should have been anxious and restless but I just never felt that conveyed. Since when are sailors on the the beach gentle? Maybe Sher forgot to take the sailors out of the Piazza. Perhaps this is easier conveyed in the film because of the size of the cast. At the first sound of the overture, I felt tingly shivers, but that feeling faded as the evening went on. I just never felt the need to jump to my feet and my heart certainly never raced which is always a gauge for me. Still, I think I'm more disappointed in my own disappointment than I am with the production (sort of the same feeling I had with Sunday in the Park with George). I really wanted to absolutely love it and I just didn't. South Pacific is beautiful and lovely and is definitely worth seeing. Maybe I'll go again and will have a different experience, but until then I'll return to the original cast recording and my imagination of what those first performances at the Majestic Theatre in 1949 must have been like.

By the way, Katie Couric was there. I saw her being accosted by a teenage wannabe journalist during intermission, although she had her cell phone out and looked like she was attempting to make a call. I'm not a fan, but Katie looks and sounds just like you think she's going to look (and not like Renée Fleming, damn it!). George M and Josie Cohan were there too. I told her,
"Bernadette, they don't do Nothin' Like a Dame in the show like you do!", which earned me a laugh and a hug.
at 4:37 PM

Great, thoughtful review as usual, Sarah. You gave me some things to think about that I hadn't really considered, like whether it should have been a little louder and more boisterous. And I love the Carnegie Hall recording, too! You always manage to weave such great stories into your reviews. It did take me a minute to get the George and Josie Cohan reference, but I got it eventually!

I've been thinking about it and I think I understand why some people may enjoy it, but not be transported by it. For years, people have mistaken the piece for a musical comedy when it is in fact a musical play, because of the film and countless productions and their tendencies to gloss over the unpleasant aspects, esp. re: race. I felt that this revival rectified that quibble I've had. And honey, you want to go again I'm more than up for it ;)

Gotta say, the musical revivals (Grease doesn't count) have been a fine repast this season, haven't they?