Absurd and Spectacular, a Cult Favorite Opened on this Day 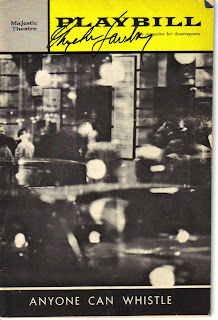 If you love Sondheim, you love Anyone Can Whistle. Don't you? Admit it. I hear it's better than Bounce, anyway. Today is the anniversary of it's opening - April 4, 1964. It was Angela Lansbury's first musical. It was the first musical that Stephen Sondheim and Arthur Laurents wrote without established composers (Bernstein - West Side Story and Styne -Gypsy). As it turned out, even after a tryout in Philadelphia and 12 nights of previews on Broadway, it only ran for 9 performances after opening. However, Angela says that if everybody who tells her they were there during one of those illustrious performances, "It would still be running." Some say it was cursed from the get to - a performer fell into the pit, landing on top of a saxophone player who then suffered a heart attack. Still, the cast was whisked into the recording studio on the morning of April 12th, 1964, for a hasty but fabulous recording, promoting its future cult status. It's a crazy, mixed-up story but oh so fabulous and brilliant. I loved There Won't Be Trumpets before I even knew the score because Bernadette recorded it on her Live at Carnegie Hall, Sondheim, Etc. album. The title song, Anyone Can Whistle is gorgeous, and is covered the likes of Barbara Cook, Betty Buckley, Nancy Wilson, Mandy Patinkin, Michael Cerveris, and more. I adore I've Got You to Lean On which was one Angela's big numbers. In 1995, a benefit concert of the piece was staged at Carnegie Hall, starring Bernadette Peters, Madeline Kahn and Scott Bacula and Angela was back to host the evening. It was recorded and is just has necessary as the original. Bernadette still sings With So Little To Be Sure Of in concert. In fact, when Little Love and I were on the front for her Avery Fisher Hall concert two years ago, it seemed as though she was singing it directly to us.

In 2005, Vicki and I attempted to see Anyone Can Whistle at the Prince in Philadelphia. The production was plagued as well, this time with bouts of flu. The three leads missed a number of performances and the production was in chaos. The afternoon we were supposed to see it was completely canceled But, we were invited in for a rehearsal as they tried to replace one of the sick actors with a local actor. Disappointed but determined, we decided to enjoy the rehearsal. Patience paid off and we were treated to an a capella rendition of the title song Anyone Can Whistle by Chuck Wagner (Hapgood). I don't think I'll ever forget it.

Next season, The Signature in Arlington will be staging a new production. I will be inviting myself down to Wanda's for another attempt at seeing this fabulous flop. Arthur Laurents has said that it will never be revived on Broadway as long as he has to do anything about it. But, perhaps with all of the success he's had with his current Gypsy revival and his planned revival of West Side Story, maybe he'll reconsider working on Anyone Can Whistle. Maybe at Encores? After all, a little Sondheim flop is better than no Sondheim at all.
at 6:36 PM

Sarah, You mean you didn't go to Ravinia in the summer of 2005 to see Patti LuPone, Michael Cerveris and Audra McDonald in Anyone Can Whistle? I was there and thought it was much better than many a musical that opened on Broadway since the notorious flop.

Nope. I wanted to. My Sondheim Devotion kicked into high gear on March 19, 2005 with Wall to Wall Sondheim. My show seeing surge began after January 2004 (Gypsy!) and I was still climbing in attendance in 2005.

Even with the luxury casting of Paudrel McCervaPone, the show was a hot mess. The songs are beautiful, even if I didn't understand most of that strange 60s psychobabble.

I do wish I had a better recording of that production. They had a great time performing it. And Patti's entrance was one of the best - carried on by five hunky men in a chaise lounge, like Cleopatra.