August: Osage-County - Replacement Casting the Mother of all Mothers 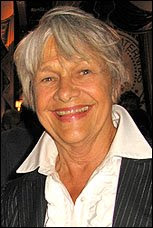 Estelle Parsons has been cast as "Violet" in August: Osage County, replacing Tony-nominee Deanna Dunagan. Estelle has been nominated for four Tony awards: "The Seven Descents of Myrtle" (1968); "And Miss Reardon Drinks A Little (1971)"; and "Miss Margarida's Way" (1978)and "Mornings at Seven" (2002). She won an Oscar for Best Supporting Actress as Blanche Barrow in Bonnie and Clyde in 1967. She played Roseanne Barr's mother in 58 episodes of "Roseanne". Something tells me she'll be able to handle playing mother to the Weston girls with no problem at all.
at 5:52 PM

I saw the tour of And Miss Reardon Drinks A Little, lo these many years ago. Julie Harris was in it (as was a pre-Maude Bill Macy) but Estelle Parsons had been replaced by Kim Hunter. Probably a terrible play, but what a cast! It made quite an impression on my youthful sensibilities and I still remember it vividly. This was in the days when even flop straight plays would tour nationally, so you know it was in the stone age. It's great to hear that Parsons is still out there working on Broadway. Sidenote: Parsons was once married to Richard Gehman who wrote my favorite childhood cookbook The Haphazard Gourmet (I thought it was tres sophistique).

Oh to be able to time travel, Karen.

I think Estelle is a great choice. I also think Cloris Leachman (if we want to stick with the 81 year old dramatic divas from the midwest) would make a stunning Violet.

Ohh this role and this play. It's going to be performed by the greatest of actresses for generations to come!!

You know, when I saw it initially, I thought there was another actress who is now an octogenarian who could play this role. Of course, she played the mother of all mothers from hell on screen in The Manchurian Candidate. But I thought, nah, Violet isn't in her 80s. But now I'm not so sure. I think Estelle will play her a bit younger. I've read the play too and it's really not clear how old anybody is except for "Ivy."

I just saw "I Never Sang For My Father" this afternoon with Estelle playing the part of Alice.
Excellent dramatic film, shows almost like a play. Oh to be in NYC and see these shows LIVE.