A Brief Encounter with Olga Merediz 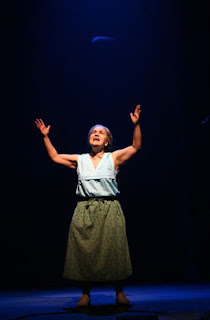 Last night when I was waiting for the bus in the traffic nightmare that is 8th Avenue at this time of year (senior trippers!), I encountered Olga Merediz waiting as well. Olga plays Abuela Claudia in In the Heights. I told her that when she stands on the edge of the stage and belts out Paciencia y Fe, it is incredibly powerful. She said that she's giving everything to that moment and when she's finished she's completely drained. I can see why. Listen to her on the player below. I added that I think she's the real soul of the show. We talked about the Tonys and how the show's doing. She's no fan of rap, but agreed with me that this Lin-Manuel's version of hip hop and rap is not the mean, heartless kind. She said it is exciting to be in brand new musical. She's a delightful lady and a terrific actress with a belt that doesn't stop. She deserves that Tony nomination for Best Featured Actress in a Musical!