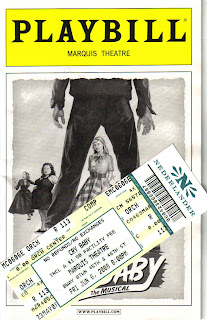 I was comped tickets for Cry-Baby last night. I went in with the absolutely lowest possible expectations, thanks to the word of mouth from every single friend who has seen it. Why bother? It is Tony-nominated for Best Musical, Best Choreography, Best Score and Best Book. Now, maybe it was that it was that was a guest courtesy of a friend, maybe it was that I was in my lucky seat 113, maybe it was the pre-show margarita, maybe it was the unusually well-behaved audience, or maybe it was just that it was a Friday night and I was in the mood for fun, but I found it to be an an entertaining show. I was expecting something worse than Love Musik, or even, gasp, Brooklyn. The coloring, sets, costumes and especially choreography were really terrific. The cast was okay, at least they did the best they could with the really horrible lyrics. Harriet Harris was her usual riotous self. I see why it's nominated for best choreography and the dancers are fabulous, especially in a prison yard break out. And how can you not enjoy an All-American finale that includes a giant apple pie, a giant package of Lucky Strikes, an Uncle Sam on stilts, and Honest Abe all dancing to 1950s rock-a-billy? I don't understand the nominations for best show, book, and especially score, but sometimes entertaining is all you need in a Broadway show.
at 7:24 AM

I don't know, I just didn't find Cry-Baby that funny or witty or clever. The main characters didn't leave that strong an impression. They weren't that memorable. Somehow I wanted James Snyder's character to be "badder," more satirical. I wanted more sly social commentary, like Hairspray. But this was my first time seeing Harriet Harris on stage, so that was great. The choreography was good, and I'm a big Rob Ashford fan, but I liked In the Heights and South Pacific better. In the end, I felt about Cry-Baby the same way I felt about Young Frankenstein, or Spamalot, which I saw on tour. Everyone around me is laughing uproariously and I'm just mildly amused. I've come to the conclusion that comedy is hard.

You know, Esther, I just didn't analyze it. I went to have fun and have fun I did. Sometimes, that's all that matters.