I finally RSVP'd to A Catered Affair on Broadway 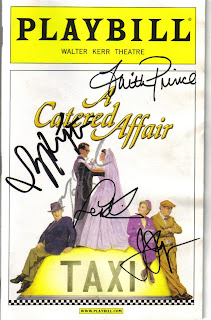 I attended A Catered Affair last night. I'm so glad I went before it unfortunately closes on July 27th. It was so many things and I was completely touched by it. At the stage door, Harvey Fierstein asked me, "Cry a little, did you?" "Harvey! It was more than a little!" It's the story of a blue collar family in the 1950s. Their beloved son has been killed in a military. Their daughter, more or less ignored, is ready to get married. She chooses to have a simple civil ceremony. One thing leads to another, mostly because of social pressure, and "a catered affair" is planned. It causes nothing but trouble, however it forces them to come with terms of who they are and what they mean to each other. John Bucchino's lyrics were so powerful and I still can't get over the unbelievable performance of Faith Prince. She said at the stage door that it was "the role of a lifetime." She said it takes a lot out of her though, especially on a two show. You could have fooled me. By the way, Faith said that they filmed for the Lincoln Center archive at the matinee yesterday. Tom Wopat was equally astonishing. He played it like an old loyal dog who's bark is worse than his bite. But when he finally lost it, watch out. Harvey, who also wrote the book, based on the 1956 movie The Catered Affair starring Bette Davis, Ernest Borgnine and Debbie Reynolds, was there to provide comic relief of a not-so-closeted gay uncle. I also found him tender and wise though. The show was funny and sweet, but also so sad and so moving. In the end, it was hopeful and I loved that the family seemed to find each other and healing from their hurt over having to make choices. I loved the connection of past choices to current choices, even when they believed that they were wrong choices or that there was no choice. Once there was realization that perhaps they might the right choices for the time, resentment fell away and there was only hope left.

Director John Doyle was loitering at the stage door. I wanted to talk to him, but he was on his cell phone the entire time. I've saw his Sweeney Todd 22 times on Broadway, once on tour, his Peter Grimes at the Met and now A Catered Affair. I think there is common ground to be found within each of these shows, especially in the downtrodden character development. I would like to know what it is that interests him and if he has some sort of affinity for the downtrodden.

There was one other stagedoor moment that was quite priceless. A young woman had various Dukes of Hazzard paraphanalia for Tom Wopat to sign. Before he came out, she called somebody and told them she was waiting for Luke. When she asked him to sign her stuff, he said, "Oh great, Dukes of Hazzard crap." She sadly explained that she had to get his autograph now because she would be unable to attend this year's Dukesfest. He rolled his eyes and moved on. I guess there are fans for everything. I must confess that our family tv was tuned to the Dukes regularly and I myself always was partial to Luke.
at 7:05 AM

I enjoyed the show as well and found it to be quite profound and touching. Although I disagree with your assessment about Harvey who I found to be a scene stealer and didn't really add anything to the show. Sometimes, imo, less is more and as a bookwriter, Harvey should have realized his limits, especially in the singing department. Besides that, I found Kritzer and Price to be astonishing and incredibly real in their character portrayals.
Renee

Awww, I'm so thrilled that you enjoyed A Catered Affair. I just thought it was such a moving story, a small slice of life, and it was told so well. Everyone in this family is at a crossroads in their lives and at the same time, they're still grieving from this horrific loss. In the end, I found it tremendously hopeful. I loved John Bucchino's score. It's so beautiful. His songs are like little stories, especially Our Only Daughter. And I actually liked Harvey's singing in Coney Island. I appreciated the way he was trying to make his voice sound more tender, less raspy. It's such a poignant song.

Sarah, I'm so thrilled that you enjoyed the show. It completely deserved more recognition at this year's Tonys, especially in nominations it lost to Cry-Baby.

And I humbly disagree with anonymous - if it weren't for Harvey Fierstein's Uncle Winston, much of the opening up among the characters would never have occurred. Uncle Winston served as a catalyst. And I also beg to differ on his singing capabilities. Never before have I heard him sound so good.

Just recently found your blog and love it! I live in Houston and finally went to my first Broadway show a few years back (25th Annual Putnam County Spelling Bee). So jealous of all the shows and stuff you get to see! Especially jealous of the fact that you've seen Doyle's Sweeney Todd 22 times! I just saw it when it came to Houston a couple of weekends ago and I'm still overcome by it. Hopefully A Catered Affair will do a national tour because that was one of the ones that grabbed my attention while watching the Tonys.
Margo

Why thank you, Margo! Welcome!