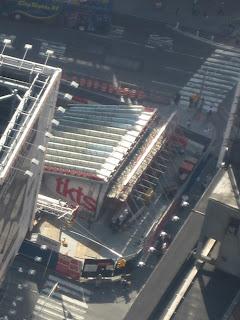 On June 1, 2007, I showed you that the construction of the new TKTS booth run by Theatre Development Fund in Duffy Square in the middle of Times Square was far from over. At that time, work had already been going on over a year. Now another whole year later, it's still not finished. Today Times Square Alliance President Tim Tompkins, told Steve Cuozzo in his NYPost column Reality Check, that, "the current completion date is June 20." I took this picture about 4:00 this afternoon. Not a construction worker in site. In fact, I look out this window work day and it's almost always a ghost town. No wonder it has taken so long. 40 story skysrapers take less time to build.

Until the Duffy Square location of TKTS opens on or around June 20th of this year or next, you can still knab 1/2 price tickets at TKTS on outisde of the Marriott Hotel 46th street between Broadway and 8th Avenue or downtown at South Street Seaport. I till forgo standing on line in favor of discounts via www.broadwaybox.com, www.playbill.com, www.theatermania.com or www.hitshowclub.com.
at 7:32 PM

Email ThisBlogThis!Share to TwitterShare to FacebookShare to Pinterest
Labels: TKTS

It's nice to know you have an eye on the scene. If I ever get to Broadway, I'll check with you first! :)

They told the Post they would open at the end of the month. But at a cost that doesn't make sense to me.
http://www.nypost.com/seven/09072008/news/regionalnews/tkts_job_scalps_city_for_11m_127872.htm