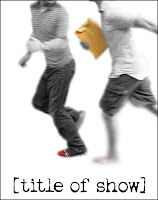 Little Love and I went to [title of show] again last night. It just happened to be press night so some critics were in the house. What did they think? We'll find out this Thursday. We ran into our friend Michael and he introduced us to Charles Isherwood (Michael, is there anybody you don't know?). Yes, The Charles Isherwood, one of the theatre critics of The New York Times. That's the "grey lady, baby." He shook my hand and a thought flashed in my mind - oh, will I write better now? Nah, probably not, but I do agree with what he has to say, usually, so it was pretty exciting to meet him. I also saw my friend Todd Buonopane. He's working on the Broadway bound Angels. Part of the beauty of seeing shows often is that you run into people you know and feeling a part of the Broadway community. That's really my favorite part.

So, the [tos]sers weren't quite so prevalent at last night's performance, the 11th preview, but the house was full and sounded pleased. At the first preview, we sat at the back of the very high balcony and last night we sat 3rd row center orchestra. What a difference. I had difficulty hearing that first night - either because of the rowdy [tos]sers or perhaps there were sound problems. Either way, it was fun to hear more of the book last night and damn, it's funny. I don't think you really have to be that much of insider to get it. It's clear that it's just plain funny. It's also clear that this is a very likable cast. I have the feeling that Susan Blackwell and Heidi Blickenstaff, basically playing themselves, are going to be great big Broadway stars. How could they not? Their numbers - Susan's Die, Vampires, Die and Heidi's A Way Back to Then - receive the most applause. It doesn't hurt that these are very relatable lyrics but Susan and Heidi also sing the hell out of them. Of course, the appreciation for the show stopper Nine People's Favorite Thing is bringing 'em home. They can definitely count me in that group of nine people.
at 10:43 AM

I saw Todd Buonopane when he performed the role of William Barfee one night. He was great!