The National Pastime takes the stage in NYC this week 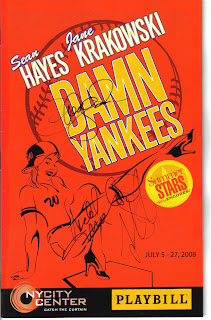 I caught Damn Yankees at City Center last night. While it wasn't a grand slam, it certainly entertained. Sean Hayes, Jane Krakowski, Cheyenne Jackson, Randy Graff, P.J. Benjamin star. Megan Lawrence, Michael Mulherren, Veanne Cox and Kathy Fitzgerald amply support. Damn Yankees originally opened on Broadway on May 5, 1955, and garnered the Tony for Best Musical, Best Actor in a Musical for Ray Walston, Best Actress in a Musical for Gwen Verdon, and Best Supporting Actor in a Musical for Russ Brown. It's the story of a baseball fan who is willing to sell his soul to the Devil to see his beloved Washington Senators beat the Yankees for the pennant. The best part of the show is the recreation of Bob Fosse's original choreography, which also won the Tony. It's pre-Fosse as we know Fosse. The choreography is smart and snappy without all the slinky sex poses of Chicago. One of the most iconic performances surviving is of Gwen Verdon. Jane Krakowski, as Lola, had to follow in these dance steps. She didn't seem all that at ease with it, and at best delivered it somewhat coldly. Sean Hayes, as the Devil, gave a fun performance, despite his delivery mostly consisting of a cross between the character Jack and Paul Lynde. The audience ate it up though and laughed at every single thing he said. Act 1 dragged, despite the two most well known songs, Heart and Whatever Lola Wants. Act 2 sped by with more fun. Sean practically stole the show in Act 2 when he played a white baby grand piano and sang Those Were the Good Old Days. Jane even got warmed up with Two Lost Souls that featured a full cast dance off. George Abbot's book is still relevant and concise. Jokes about the Yankees and politics were crowd pleasers. The music and lyrics by Richard Adler and Jerry Ross' are at times dull - the ballads are just boring, despite heartfelt performances by Cheyenne Jackson and Randy Graff. However, their uptempo numbers had the audience toe-tapping and practically singing along. The audience did sing out loud during the final curtain call reprise of Heart. The orchestra section was completely full and showed their appreciation with a mostly standing ovation. I went to the stage door after and saw one of the biggest crowds I've ever seen. My mood was dampened when a girl waiting next to, who could not stop bragging loudly about her autograph techniques, asked to borrow my Sharpie. You know how I feel about that. However, I stuck it out. Sean Hayes stopped just short of where I was standing, but I got autographs from Michael Mulherren, the ever generous and charming Cheyenne Jackson (his birthday was yesterday) and Jane Krakowski. A Theatre Kid took my picture with Jane, but it's frightening of both of us so I decline to post it here or anywhere.

Meanwhile, it's All Star Week in NYC, culminating with the All Star Game at Yankee Stadium on the 15th. To kick off the event, Major League Baseball presented a Bon Jovi concert for around 60,000 people in Central Park last night. I saw long lines people waiting quite early along Central Park West and heard the noise, I mean the soundcheck, from my apartment. By the time I came back from City Center, Central Park West was pretty much cleared except for dozens of NYPD waiting to end their shift. 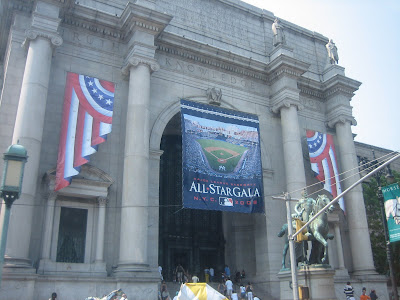 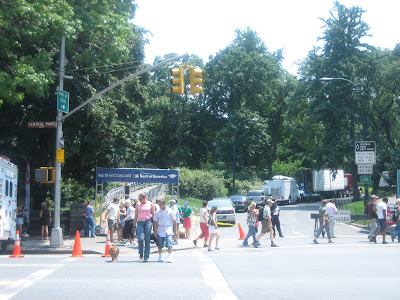 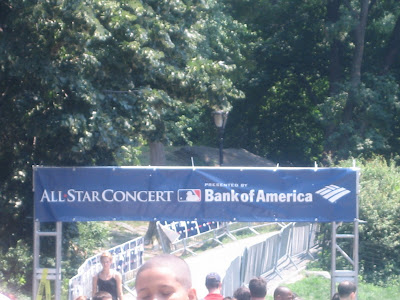 It seems I like the score a whole lot more than you do. The 1958 film version with most of the original cast from the stage show is one of my very favorite Broadway to movie musical adaptations.