Time for a Hello, Dolly Revival? 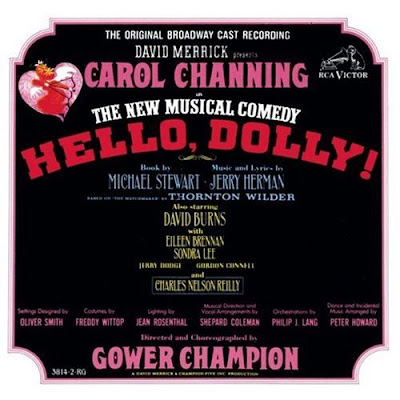 The new animated movie Wall-E features two songs from Hello, Dolly . Composer/lyricist Jerry Herman predicts "this will heighten interest in a Broadway revival of 'Hello, Dolly'! I've been thinking about it, and there are several ladies — stars — I am already playing in my head to cast." Hello, Dolly was my first big Broadway show. I saw it at the Performing Arts Center at UT Austin sometime in 1995 or 1996 and Carol Channing was reprising the role as a farewell tour. It was nothing short of amazing and I loved every minute of it. Now, if there really is a revival, who would Jerry want to be cast as Dolly Levi? Maybe Bernadette Peters? Christine Ebersole? This would be very exciting, but if there's going to be any revival of a Herman classic, my hope would of course be for Mame.
at 1:16 PM

Maybe because I'm biased, but Audra McDonald would make for the perfect Dolly. The first black Dolly Levi? That would be so awesome!!!

Oh Joseph, Audra would be fabulous! But Pearl Bailey was the first black Dolly Levi. She not only replaced Carol Channing in the original production, she was in an all-Black and won a Special Tony for it in 1968.

I had the good fortune to catch Tovah Feldshuh when she did it at the Papermill and man - it was great!! I went back for a second round. The whole production was very fresh (also featuring our beloved Kate Baldwin as Irene)

Oh wow, Tovah Feldshuh and Kate Baldwin, that must have been something! I loved Kate in "She Loves Me." I'd love to see Audra again, too, in anything.

OMG Audra would be amazing as Dolly!
I could sort of see Christine Ebersole in the role, but now that someone had to go and mention Audra, I really can't see anyone else playing it.

I, too, wuold prefer a revival of Mame first.