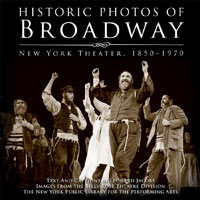 If I could afford it and had the room, I'd get every giant picture and coffee table book available, especially the ones about theatre. So, when Turner Publishing offered to send me a copy of Historic Photos of Broadway: New York Theatre 1850-1970 , I gladly jumped on the opportunity. This book of amazing photos was compiled by Leonard Jacobs, the national theatre editor of Back Stage. Leonard culled through the Billy Rose Theatre Collection at the New York Public Library of Performing Arts. The collection, which began as early as 1905, holds photos and archival documents dating back to the mid-1800s. Leonard follows a stream of consciousness of theatre history, touching on some of the most important theatre contributors, both on-stage and off, from pre-Broadway until the early 1970s. There are photos of people and theatres from those early days whose names are still important to today's Broadway: Booth, Belasco, Bernhardt, Lyceum, Maude Adams. He also covers more modern names like Ethel Merman, Gwen Verdon, Carol Channing, etc. Most of those people are gone now and some of the theatres as well. The images, all black and white, are a stunning mix of portraits and posed action shots on stage. The opening photo is of an audience watching The Show Off in the Playhouse Theatre on February 5, 1925. The final photo is of the cast of Hair, standing nude behind a long banner celebrating their 2nd birthday on Broadway. It's obvious that Leonard loves the theatre and provides a fascinating, if brief, history of each photo. The book provides a lovely passport for time traveling and I confess that I am drawn to look at the beautiful photos each time I sit by my coffee table.
at 8:11 PM

My fave coffee table books that are proudly displayed:

"Broadway: The American Musical" that supplements the excellent PBS documentary, and

"The Sweater Book" that Stephen Mosher shot of great New York legends in the same singular sweater, all to help those with HIV/AIDS.

How were you able to get a publisher to contact you? That's awesome!

I too am a big fan of "Broadway: The American Musical". I'll have to check out this one - it looks fabulous!

And on a completely unrelated coffe table book note - I just found two that I'm dying to get - "Party Dress" and "Evening Dress". Both of which make the costume designer in me very, very happy.

I have TWO copies of "Broadway: The American Musical" and don't even know why! I ordered this book you have, "Historic Photos of Broadway" and I also ordered "The Sweater Book," looks really good!
Happy to receive all these great tips. And I'm the one who is supposed to be getting rid of everything... apparently not!