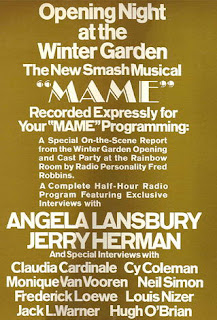 Robbins: Mame is so important philosphically in today's world. It is such a cry for individualism, for freedom.

Angela: Yes, you're so right. Indeed, it is. Of course, it is. As you say, we must allow the individual to emerge. And I think, Mame felt this as far she herself was concerned unconsciously and yet, she perpetrated this creed to everybody she came in contact with. And this is what, I feel, comes across in her character and this is what lifts the audience up and what thrills me more than anything is the fact that young boys and girls who have seen the show, they dig her, by God, she's a standard carrier for them and they understand and they sense that she represents another generation who understand them, because she's no age, she goes on forever.

Robbins: She did what she wanted to do, she was ahead of the times, she believed in leading, and not following, not being back in the gray of life.

Angela: Yes, absolutely, oh she believed that militantly. And this was the reason she could not, would not condone injustice, or bigotry, intolerance in any area of her life. It's very evident in the play, although it's touched on lightly, and with care and with subtlety. Nevertheless, she stands for a lot of marvelous things.

Robbins: But in these days when the young people try to be so individual and nonconformist and are criticized for it, Mame was the prototype of complete individuality, doing what you want to do and loving it. We were talking to Louis Nizer earlier this evening about what Mame represented and the ability to be eccentric in the world as long as there's charm and love with it, you know, it's a marvelous quality.

Angela: Of course, it is. Becuase these kind of people can be so important in our lives, in our public life, our school life, it's the teacher that stands out that's just a little different from the other teachers because they're prepared to stand and talk and discuss with the kids on their level, these are the people, the characters in the newspapers that keep coming up, they're the ones, they're the frontrunners, they're not afraid to stand up and be counted, to be heard, to talk, to discuss, to lead. How many leaders are there? Too few unfortunately. But the ones that are there, we idolize. We need them so badly.

Robbins: Patrick Dennis put it so well in the key line in the play of course, "Life is a banquet and most poor suckers are starving to death."

Sometimes what appears to be the simplest of words, turn out to be the most profound. Nothing stands taller than the individual, blossoming and displaying a myriad of colors.

Who charms the husk right off of the corn? MAME!!!!

So excited about Drury Lane!

Remaining an individual in a world full of Gap billboards. An amazing and respected feat.

Of course, remaining an individual is easier if you are fabulously wealthy.

My life's goal is be Auntie Mame.