TKTS: The damn thing finally opened and I missed it.

For months, I've been obsessing over the TKTS Booth. Yesterday the damn thing finally opened with all kinds of hoopla and I missed it. First, Bernadette Peters and Mayor Bloomberg performed a grand opening ceremony complete with confetti. The first 1,000 customers in line to buy discounted Broadway tickets were treated to one or two vouchers, each redeemable for one free ticket by Target. In the evening, the lights were officially lit by Brian Stokes Mitchell, Sutton Foster, Julie Halston, and John Leguizamo. The delay of construction was caused by a number of factors, including a bankruptcy by the glass manufacturer. How ironic that I was at bankruptcy court all day. 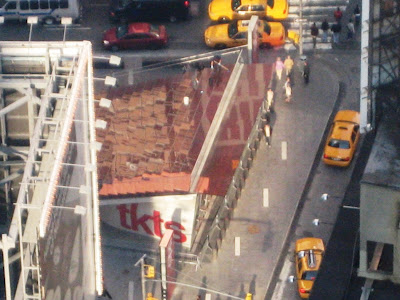 Oh no! I was just reading the article about the unveiling and how the whole thing was constructed (oh architecture....) and I was wondering if you had participated in any of the festivities. Boo!

Don't it figure that you've been staring at that damn thing out your window for how long and you weren't there for the grand opening. And in bankruptcy court on top of it! Oh, the irony!

Priorities for pity sakes Sarah! You've got to work, right?