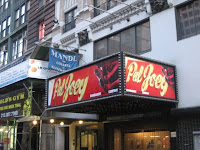 After catching the first preview about a month ago, I saw Pal Joey again on Sunday. From the first talk of the reading to the first glimpse of their marquis, I was excited for this revival. Unfortunately, the only thing sparkley about this classic show is the marquis. The Joe Mantello production is dark and seedy as is the set with only flashes of brightness. Only the William Ivy Long costumes bring richness to the show. Otherwise, it all seems cheap.

Pal Joey is the story of a Chicago nightclub entertainer in the late 1930s. He's uses everybody to get what he wants, especially women. He's probably not as good as he thinks he is, but he manages to get by. It was first a book by John O'Hara, then a 1940 musical by Richard Rodgers with lyrics by Lorenz Hart. It was made into a movie in 1957 and now it's in its fifth Broadway revival.

It has been much publicised among the Broadway bloggers, chatteratti and local gossip columns that Christian Hoff, originally cast as Joey in this revival, was not up to the iconic role. After all, Gene Kelley played Joey on Broadway and then Frank Sinatra took a turn in the movie. Expectations were high. At the first preview, I was stunned when Hoff began singing and dancing, or what passed for it. It's important to cut a production a little slack when it's the first preview in front of a paying audience, but Hoff did do the workshop and the rehearsal way back in 2007. Joey is not exactly a lovable cad, but he is supposed to be an entertainer. There was nothing entertaining about Hoff. Hoff also seemed too old for the role, mostly because his thinning hair was so visible from the mezzanine. Unfortunately for Hoff, he injured his foot and was replaced, fortunately for the production, by the young understudy Matthew Rische.

For me, Rische's voice wasn't quite there in the opening notes, but his voice actually improved as the afternoon went on. He's also a looker and has it going on in the steps department. It would be understandable why the older Vera Simpson would be so easily tempted to keep him.

The only thing not disappointing about the first preview was the revelation that was Martha Plimpton as Gladys Bumps. This time she stole the show again. She's got a great low voice and good control of character accent. She was sexy too, with just the right amount of sarcasm. She received much deserved boisterous approval from the audience. During the intermission and after, I could hear the excited buzz about her. I've seen Martha in a few plays and loved her. It's so exciting to see her versatility and I can't help but equate her to a young Elaine Stritch. She sings one of my favorite songs in the show, Zip, which is normally sung by another character who is a reporter. In this revival, they cut the reporter and made it part of Gladys' act. Zip is great song about a reporter and her favorite interview - the one from Minsky's, also known as Gypsy Rose Lee. In the original production, June Havoc, Gypsy Rose Lee's real life sister, played Gladys. I get a kick out of six degrees like that.

Speaking of Six Degrees of Separation, it's exciting to see Stockard Channing in a live production. As wealthy Vera Simpson, she's a sexy elegant in the glamorous gowns and I like her delivery - sort of choppy and halting, dripping with world weary sarcasm. It's not a big singing role, but I wanted so much more for Bewitched, Bothered and Bewildered, the much interpreted standard. I have around ten different versions of the song on my playlist and my favorite is Ella. Unfortunately, Stockard's voice is a bit croakish although her delivery portrays a sadness of the situation - there's Joey asleep after their tryst and she's trying her damnedest to justify the situation. It was heartbreaking.

So, there were flashes of beauty and fun, but overall, I found Pal Joey lacking and unfulfilling. If you want to go, don't pay full price: use a discount code or if you're lucky and under the age of 35, join HipTix. It runs at Studio 54 until February 15th.
at 6:18 AM

Guess I enjoyed it more than you did. I even loved the set design. But I agree with you on Martha Plimpton, who no doubt will be receiving a well-deserved Tony nod for her exceptional work here.

Glad you happened to catch the Zip/Havock degrees of separation, too -- it wasn't lost on me as I told our friend Sunday evening all about it.

Is it just me, or most of the Roundabout shows darkly lit?

I felt that way about "Liaisons," "Pygmalion," and "The Ritz."

However, that was never a complaint for me with "Sunday" or our mutually adored "Old Acquaintance."