The Widowing of Mrs. Holroyd 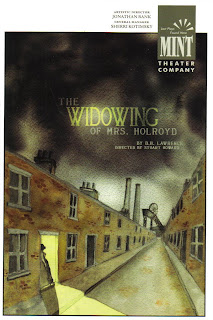 On Wednesday night, Noah and I saw D.H. Lawrence's first published play, The Widowing of Mrs. Holroyd, at the Mint Theatre. Boiled down, it's about a young woman, played by Julia Coffee, unhappily married to a hard drinking coal miner, played by Eric Martin Brown, around the turn of the century. It's a sad, hopeless story, but provocately asks the question, "Do you really mean what you wish for?" It seems that she has married beneath her, but is tied to the responsibility and the children. The first act is filled with terrifying verbal abuse by the drunken husband and a mixture of despair and disgust from the wife. She has a male friend, played by Nick Cordeileone, who spends enough time with her that people are beginning to talk. It's seems obvious that the male friend longs to be with her and when he offers her a way out, she realizes that she wants him too. In her need for freedom from the marriage, she voices her wish that the husband would be dead.

The director Stuart Howard has a very gentle and precise hand with this piece. The sexual tension between the wife and the friend is very subtle and each action and touch is almost erotic in it's lightness and smallness. After the climax of the first act, tragedy strikes with the death of the husband. Although it is an accident, the wife believes her wish to be murder. She accepts the responsiblity of preparing his body for buriel and commences cleaning him. During the process, even though he is dead, she confronts him and comes to term with their relationship. It is at once tender and unbearably painful that her hatred toward him seems to fade away as the lights finally fade. Julia Coffey's powerful performance as the wife, Mrs. Holroyd, is one of the best I've seen.

The Mint Theatre is a beautiful little blackbox on West 43rd, between 8th & 9th Avenues. It's on the 3rd floor of the unassuming office building at 311 West 43rd. I was there a couple of years ago for some other play. Marion Williams' simple set design for this production seemed to transform the entire space. A wonderful extra touch to the spare set was a trough filled with coal surrounding the stage. The Widowing of Mrs. Holroyd has been extended through April 5th. Discounts are available at www.broadwaybox.com.
at 10:11 AM