Hunks on Broadway this Fall

Remember when I told you on January 14, 2009, that Daniel Craig told Regis and Kelly that he would like to make Broadway happen? Well, in the Post today, Michael Riedel says it is going to happen and not only is it one hunk Daniel, but two! Hugh Jackman will join Daniel Craig in a new drama, "A Steady Rain" by Keith Huff. Oh my! Two hunks. Think there's a shirtless scene in this drama? One can hope. 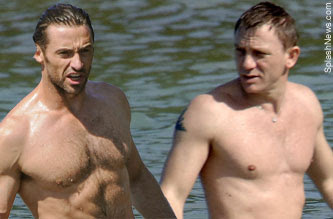 Hope they crank up the air conditioning because that theatre is going to be hot!

I read that and plotzed. I might be making a special trip in for those handsome, handsome, men.

I read that and plotzed. I might be making a special trip in for those handsome, handsome, men.