Now, that was a show!

I went to the The Minds That Move The World Speaker Series: Charlie Rose Interviews Karl Rove and James Carville last night with my friend Joe. Joe is a politics junkie on the same level that I'm a Broadway junkie.

It was theatrical to say the least: drama, passion, humor, histrionics, protestors! Wow. It did feel a bit rehearsed, but was entertaining. Protestors screaming "Karl Rove is a warm criminal" were removed, as was a young woman, in a very short skirt, who stormed the stage with a set of handcuffs in an attempt to arrest Rove.

Carville came across as a nut, but a very smart and passionate one at that. Rove just came across smart and strong in his conviction. Things really got out of hand when they started arguing about Bush's initial ignorance of Katrinia - all three men were shouting at the top of their lungs. The thing that came across to me though was these men are professionals whose jobs happen to be political strategy and election and they definitely respect each other, even if they are on the far opposite side of the political spectrum. 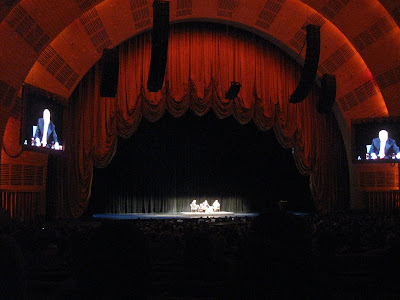 I have a secret crush on James Carville. Oops! Secret's out!

And I would've liked to see the handcuff lady.

I love it when James Carville and Mary Matalin do shows together (like Meet the Press). It's always entertaining.

Years ago, I saw Anne Coulter speak at UofA and some people tried to "pie" her. Although they had a clear shot and weren't very far from her, they missed completely and were escorted out by the cops. Politics makes for some great theatricality!